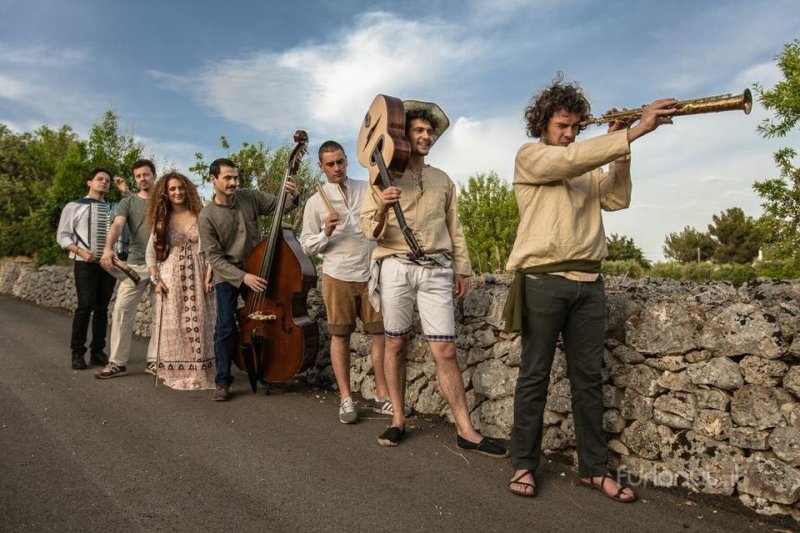 + 3 more
ABOUT
Towards the end of 2011, almost all the components of band "Apulia Ensemble" decided to follow the path of musical innovation , forming the band "Kailia."

Seven professional musicians, attending (or graduate) and several conservative Italian prestigious academies of music, come together in the name of two primitive forms of art: music and dance. Their aim is to create a strong bond between these arts through the involvement of the listeners. Precisely for this reason, they start from the folk music!

From the tradition of singing pruners Of Alto-Salento (who sang in the trees during the pruning of olive trees), the "stornelli" of the "Tarantella" and "Pizzica Pizzica", they begin to go further, to find out how tarantellas of southern Italy are so close to Irish jigs, and as the wind orchestras ("Bande") of Puglia have much in common with fanfares and "taraf" respectively of the populations of Eastern Europe and the gypsies.

Kaìlia, ultramillenarian name of Ceglie Messapica, it is the native area of the seven musicians, which go back to the ancient traditions of music and dance, and want to innovate them with new ideas, and with their young energy.

Kaìlia born after the participation of Giovanni Chirico, Paola Barone, Donato Quarto, Davide Chiarelli, Giuseppe Gallone, Andrea Antelmi and Remigio Furlanut to the Prime Ministerial contest for Bande, choirs and folk groups, with a request for special mention by the jury at the Ministry of Art and Culture.

Into the live of their research (not only musical, but also cultural) they perform in various events of Puglia, to reach to the stage of "La Notte della Taranta" in August 2012, as a few other groups in their area.

Their journey continues, as well as continue the meetings with prominent personalities of traditional music of Puglia.

Between the various concerts, in August 9, 2013 is finally churned out their first album, entitled Kailia, entirely self-produced and self-financed.