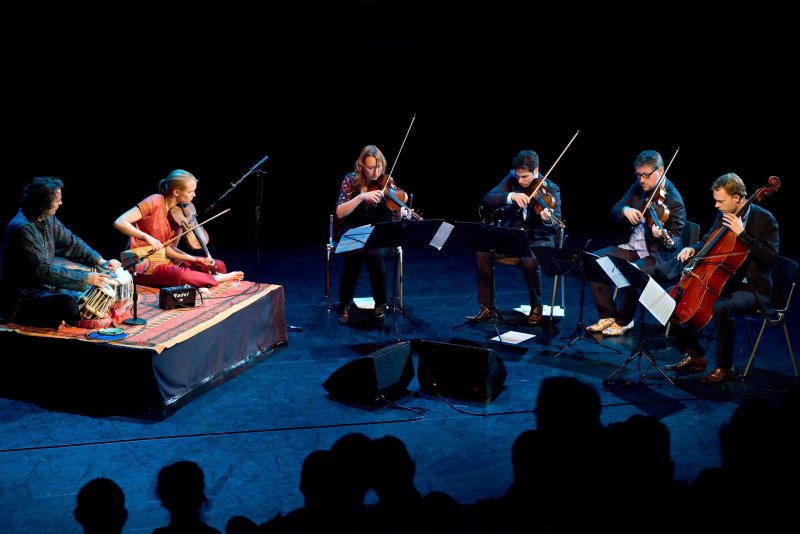 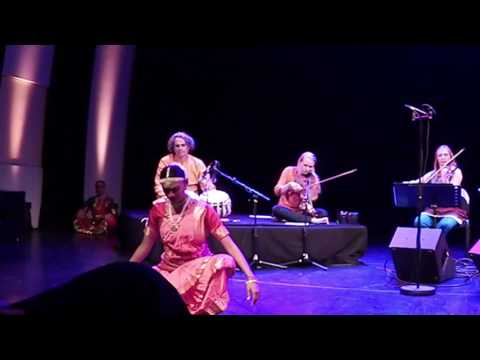 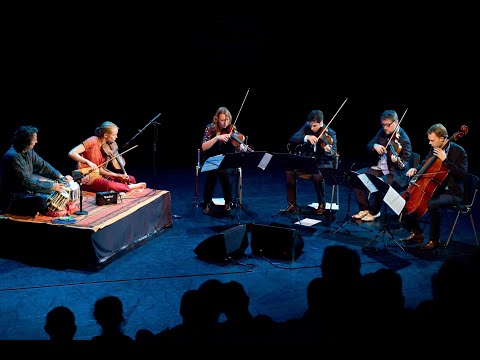 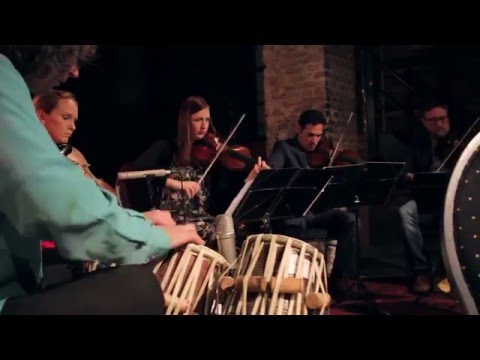 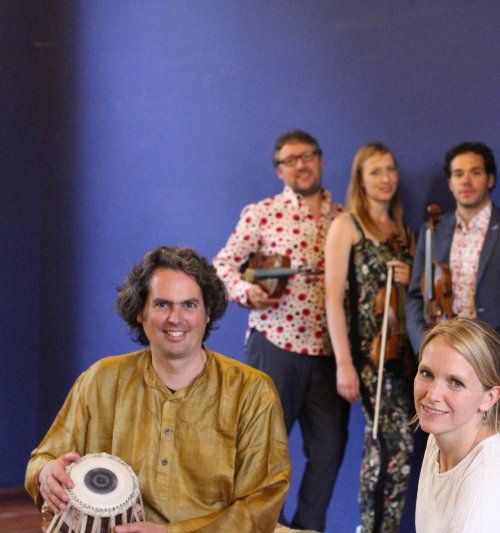 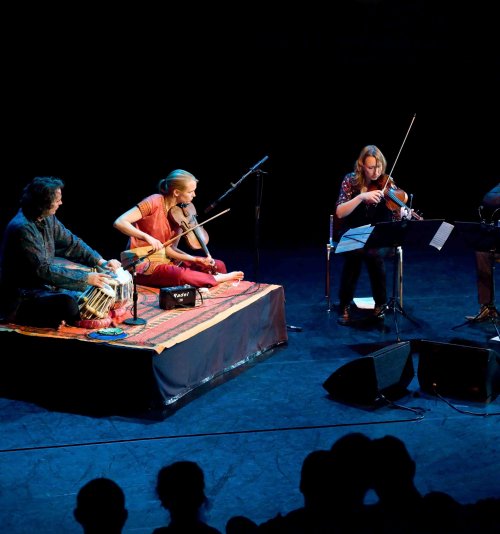 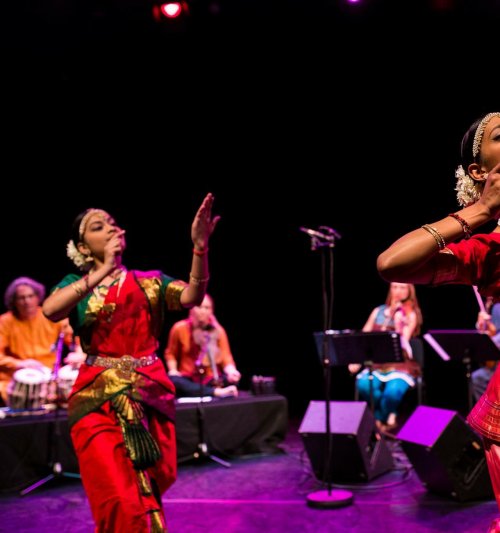 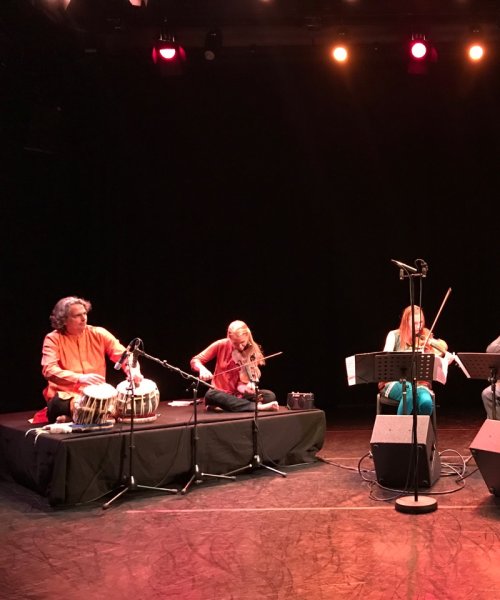 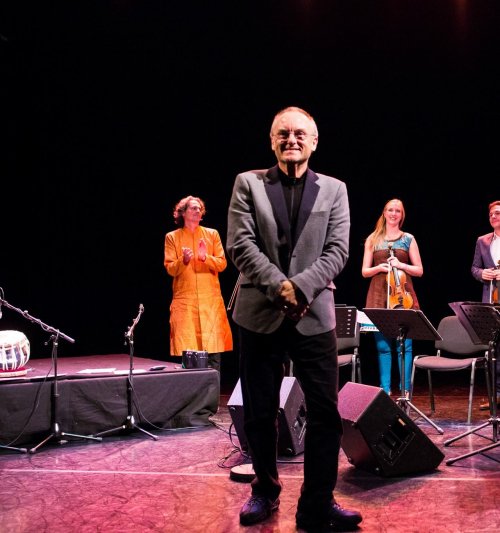 ABOUT
www.bombaybazaar.nlBombay Bazaar is a program in which the classical traditions of India and the West meet. Two very different musical cultures are joined together, without losing their identity and personal power. Central to the project is Jacob ter Veldhuis. His groundbreaking composition 'Raga' - written for Lenneke van Staalen, Heiko Dijker and string orchestra - was the starting point for cooperation of this special sextet. Thanks to its emotional expressiveness 'Raga' already touched many audeinces. Jacob TV was inspired by classical North Indian music, and composed a harmonic and rhythmic framework within which the soloists improvise, based on an ancient Indian raga Yaman. Besides 'Raga', the program will also include a new work that Jacob ter Veldhuis wrote especially for Bombay Bazaar, 'Serendipity.'!The Matangi Quartet was founded in 1999 by four young musicians then studying at the Royal

Conservatoire in The Hague and the Conservatory of Rotterdam. In 2003 Matangi completed the two-year, full-time course at the Netherlands String Quartet Academy under the direction of Stefan Metz (cellist, Orlando Quartet). At the Academy, the Matangi Quartet had the opportunity to take lessons from international renowned musicians, including the members of the Amadeus Quartet. The quartet also received intensive mentoring from Henk Guittart (violist, Schönberg Quartet) for several years."

The Matangi Quartet has since developed into a regular performer in the Dutch chamber music scene and abroad. With their impassioned playing and smart presentation, Maria-Paula, Daniel, Karsten and Arno epitomize a new generation of classical musicians. They are often characterized by words such as communicative, provocative and refreshingly versatile. The Matangi Quartet has shared the stage with various top-class classical musicians and has also been invited to perform in various festivals, including the Delft Chamber Music Festival, the Aix-en-Provence Festival, the Schleswig-Holstein Music Festival, the Carthage Festival in Tunisia, the World Expo 2010 in Shanghai, the International Conservatoire Festival in St Petersburg and the North Sea Jazz festival in the Netherlands."

This musically gifted and talented duo has been praised for their fiery virtuosity and emotional depth of play. After their studies in India, they both received the highest marks for their master-degree at the Rotterdam Conservatory. Both in India and the West they are loved by audiences at major festivals and halls, leaving a deep imprint.

De Volkskrant: ‘....a sonorous example of how haunting swing and vocal lyricism can be united.’ ‘.....inside flamed her passion...’ (about Lenneke van Staalen) T rouw: ‘It’s amazing how Heiko Dijker plays tabla; as if his hands make them speak.’ Radio Z es: ‘...Breathtakingly beautiful......’ Z eeuws Dagblad: ‘........a convincing inspired performance.’ The Pioneer: ‘Reaching out to a world-wide audience’ The H indu: ‘Heiko Dijker is a Tabla player whose fingers can do a magic and who plays on the marks of Enthusiasm and Energy’ ‘Heiko Dijker is a global ambassador for Indian Classical Music’ ‘The music made its way into everyone's soul’