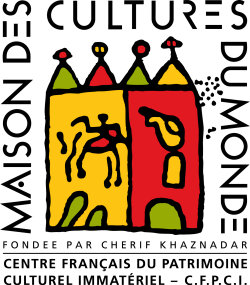 France
About
ABOUT
The Maison des Cultures du Monde (World Cultures Institute) was created in 1982 to promote cultural exchange programs between French and other countries throughout the world. It is open to all horizons and civilizations, with a preference for cultural and artistic perspectives rather than a strictly political focus. It is committed to protecting cultural diversity and the expression of cultural identities.

Based on its main on-going mission of supporting and sustaining intangible cultural heritage throughout the world, it focuses on unveiling the immense diversity of creation and re-creation through the extraordinary abundance of festivities, rituals, games and entertain-ment by which man depicts himself. Human beings express their most personal aspects through the act of creation, and by opening ourselves to the cultural expressions of others we come to know each other better and to better understand the specificity of human nature and the relationship of human beings to the world. The World Cultures Institute is recognised in France and abroad for its pioneering role in :

protecting and encouraging awareness of cultural diversity and respect for difference;

founding the anthropological discipline "ethnoscenology", in conjunction with the international academic community and UNESCO;

The Festival de l’Imaginaire, established in 1997, is held each year in spring and features groups of traditional performing artists. Most of the artists are performing in France for the first time, or there may be "comebacks" after several years of absence, either to cater to the desires of a new generation of spectators or to introduce new talents to the international scene. During the festival, it is not uncommon to watch great masters, guardians of tradition, performing alongside young artists eager to enrich and revive age-old art forms.Over a period of three months, between March and June, the festival is held at several wellknown Parisian venues (The Alliance française Theatre, the Amphitheatre of the Opéra Bastille, the Auditorium of the Louvre Museum, the Arab World Institute, the Guimet Museum, the Zingaro Equestrian Theatre, etc.) and marshals the energies and enthusiasm of other regional and European institutions that want to introduce as yet unknown cultural forms to European audiences.The festival strives to constantly kindle spectators’ curiosity with a three-pronged approach: Exploration, Discovery and Revelation. Each performance is put through a painstaking field study before selection. The decision to schedule a given art form on the Parisian cultural scene is not taken lightly: the choice is based on several parameters, in particular, the esthetic yardstick of the culture in which this art form originated, and the risks inherent to transplanting it into a "foreign" environment. A large network of consultants, cultural advisors and associates assure this phase of extensive research and the preliminary groundwork: anthropologists, theatre people, local consultants, and others work to ensure that the programming remains true to its meticulous standards and philosophy.In 2006, Chérif Khaznadar entrusted Arwad Esber with the artistic direction of the Festival de l’Imaginaire and appointed her Director of the World Cultures Institute in 2007. With one foot in Western culture and the other in oriental culture, she is particularly sensitive to questions of respect for the right to difference and for cultural diversity and has been developing the festival further in three main directions:• doing research on unknown expressions of intangible cultural heritage and promoting the transmission of these cultural expressions to new generations;• focusing special attention on countries which have, throughout the years, witnessed the multiplication of its peoples and cultures and presenting the results of such crossbreeding;• seeking artists among the new generations who have been able to recreate their traditions according to their own cultural assets and to produce new creations;• further developing of educational and outreach activities. The festival is also a forum for reflection and for debate. Symposiums, round tables, conferences, lecture-demonstrations and other activities highlighting issues of cultural interest or of social concerns, offer new landmarks, thus broadening our vision of the world.

"World traditional music" has braved considerable changes over these last few years. Today the heading "world music" encompasses a variety of genres: from traditional music – both erudite and popular - to international pop and urban foreign music. The INEDIT series, founded in 1985 by Françoise Gründ and led since 1999 by ethnomusicologist Pierre Bois, is the World Cultures Institute’s answer to the ever-evolving trends and the confusion of genres that prevail in the market. It is the alternative born of our commitment to defend the integrity of living cultures and repertoires emanating from tradition.

Follow
Send Message
About
The Maison des Cultures du Monde (World Cultures Institute) was created in 1982 to promote cultural exchange programs between French and other countries throughout the world. It is open to all horizons and civilizations, with a preference for cultural and artistic perspectives rather than a strictly political focus. It is committed to protecting cultural diversity and the expression of cultural... more
Other Pages