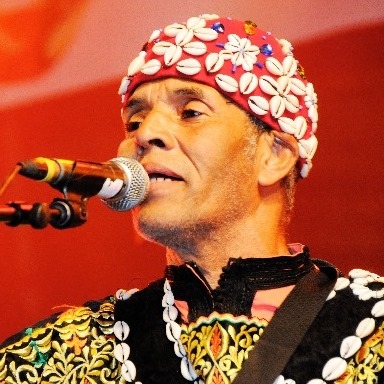 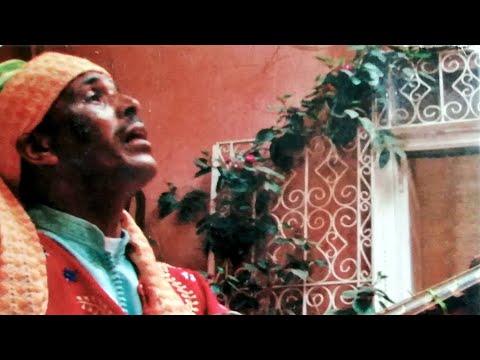 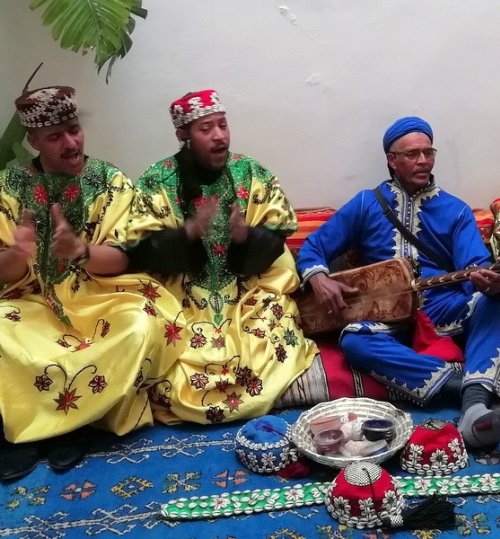 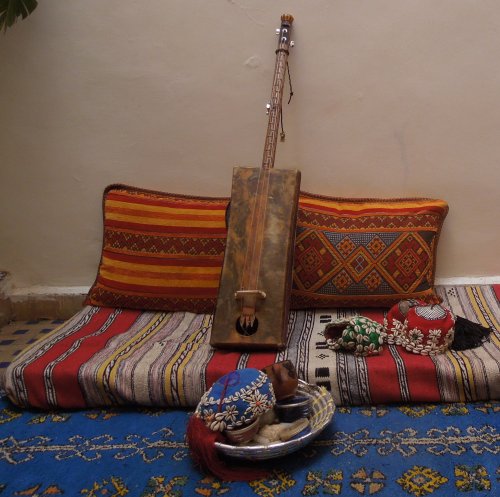 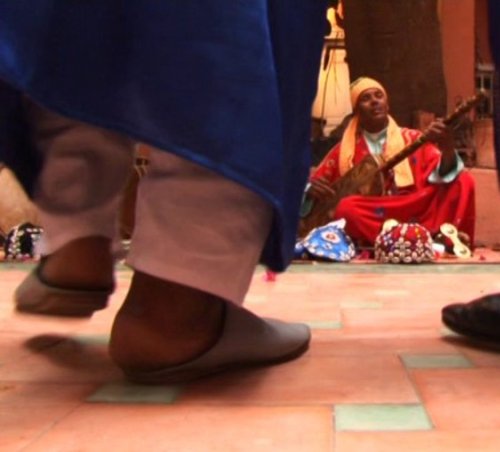 After several years of absence from the international stages, Maâlem HASSAN EL GADIRI does us the honor, in 2020, to leave its activities within its brotherhood to offer us the authentic gnawi sound of Marrakech.

Accompanied by his 3 sons whom he introduced very young to the practice of the guembri (Bass) and by Kamal Ifir, Maâlem HASSAN EL GADIRI delights you in a trance sometimes swaying and throbbing, sometimes percussive and wild. Between the bass of the guembri and the treble of the Qarqabas (metal-castagnets) the captivating voices, in pure Marrakshi style, propel you to the African roots of trance...

The musicians were born and live within their gnawi brotherhood in Marrakech. Everyone practices their art on a daily basis, between performances on Djemaa El Fnaa square where Maâlem HASSAN EL GADIRI also plays a social role, ritual nights of trance (Lilas), manufacture and export of guembries and quality gnawa ritual objects, and tours abroad.

Maâlem HASSAN EL GADIRI & Sons lead the most varied audiences into trance, communicating the warmth of African tradition thanks to their modern knowledge of the performing arts, added to their ancestral know-how.

The Gnawa are a brotherhood with mythical origins from Mali and the Sudan. It has thousands of followers in Morocco, particularly Marrakech. Ritual practices based on music and trance unfold during night-time ceremonies known as 'Lilas'.The social importance of the Gnawa is evident during these private celebrations. The Gnawa can provoke or pacify a state of trance among the public, whether initiated or not. The trance plays a role which is both therapeutic, liberating and integrating.

This tradition is handed down orally and musically from Maâlem (master) to Maâlem among families of often slave origin.
The traditional instruments are the guembri or sintir (three chord bass guitar covered with camel skin), qarqabas (metal castanets) and Tbel, the drums. The singing is cyclical in structure, with one sentence from the soloist followed by a sentence sung in chorus.

The Moussems (pilgrimages) are an annual opportunity for the various Gnawa groups (Aissaoua, Jilala, Hamadsha) to meet up and share ideas. During the Moussems, daytime processions and night-time Lilas take place around a given saint's mausoleum.

A Lila is made up of three parts. The order varies depending on family traditions.

In general, the first part is secular (Oulad Bambara, without qarqabas, then Neksha, with qarqabas), the singing and dancing precedes the actual ceremony and there is no trance. A ritually sacrificed animal is served during the meal to all the guests.
This is followed by the Ada (calling of the spirits) organised by the Moqqadma (mistress of ceremony). Punctuated by the rythym of the drums, the first trances often take place at this part, with offerings of dates and milk.

A Lila ends with a festive atmosphere at dawn, accompanied by a meal served to all the guests.