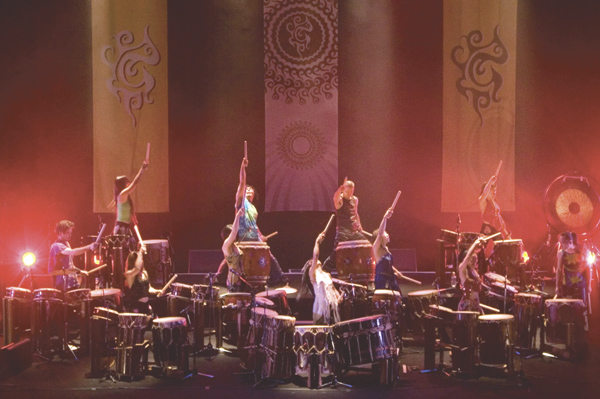 ►
GOCOO - Daichi no Kioku - live in Norway - Taiko
by GOCOO 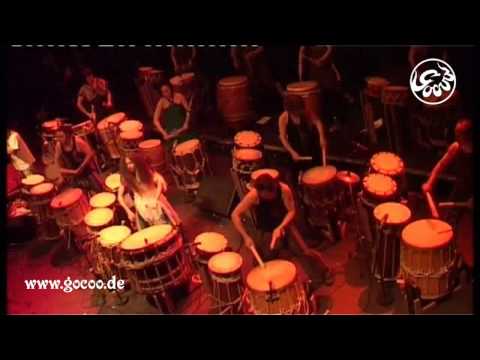 2013 GOCOO returned with their new live CD Eleven to Europe. The band toured 7 countries performing 15 concerts including, already for the second time, a show at Peter Gabriel's renowned WOMAD Festival (UK). The concerts in Belgrade, Sarajevo und Zagreb were recorded for later broadcast, the concert in Zegrab was also broadcasted live and nationwide. In addition GOCOO performed live and without playback on Germany's major national TV station ZDF (ZDF Fernsehgarten). Lead drummer, Kaoly Asano, attracts much attention as a female Taiko artist. Whenever not performing with GOCOO on stage, she teaches the art of playing the Taiko at her famous Taiko school in Tokyo. Press clippings Rave Magazine Australia “Their message of global unity resonates with the audience as strongly as their hypnotic sound.” The Jakarta Post “The crowd was torn between wonder and ecstasy. The audience had virtually gone wild, carrying on the Herculean energy spawned by the band.” Tink.ch Swiss “Within an hour the lovable Japanese band was overwhelmed with euphoria and hardly released from the stage. The eleven musicians were for sure one of the discoveries of the Openair Gampel.” Coburger Tagblatt ”With unleashed power Kaoly Asano and her musicians reach a higher level of musical existence with their flowing sound storm.” Schwäbische Zeitung “The audience goes crazy. The Drummers from Tokyo get such a delight in playing across to the audience of the sold out big tent that they are hardly tameable.” Nice Martin “You can not comprehend GOCOO just with your ears – the entire body is needed and maybe even your soul. The audience breaks out into rejoicings after each piece.” Kölner Stadt-Anzeiger “Vigorous and full of energy the eleven musicians create a primal drum thunderstorm. From the first moment on the rhythmic spark made the audience, which was completely thrilled, catch fire.” Regiomusik “Nobody was able to escape from the rhythms. They were, without exaggeration, cosmic beats.” The Australian “The Japanese taiko drumming ensemble GOCOO is the personification of power and grace.” Mannheimer Morgen “GOCOO is drumming cannon-like and synchronous an intense beat of which any heavy metal band can only dream of. The audience is thrilled and hypnotised by the magic of the drums, which are accelerating the heartbeat and make the mind fly, and the gorgeous choreography of the show.” Südwest Presse “A entrancing spectacle for your ears and eyes. An inferno of syncopes and polyrhythmic attacks with a musical diversity that glides seamless back and forth between Japanese drumming tradition and western influences.” Stuttgarter Zeitung “GOCOO unfolds an impressive dynamic that finally dissolves in the harmonious cosmos of a total rhythm." Neue Presse ”With vast energy and contagious joy GOCOO drums itself and the audience into a state of ecstasy - they are drumming down all borders between east and west, tradition and pop, rite and party.” Frankfurter Rundschau ”Regarding the outspread of the dynamical threshold, long crescendo and decrescendo, the group is by no means ranked behind a first class symphony orchestra.” Kateigaho International Edition ”The hall fills with the mighty sound of taiko drums. Deep, heavy, thick, and furious sound. The music of GOCOO infiltrates the very core of those who hear it.“ Drums & Percussion ”On stage you have to think of this band as a force of nature: performing unbelievable intensive and transferring the energy and enthusiasm on the audience.” Triggerfish ”Even Slayers Dave Lombardo would be amazed: just when you start to believe that the humanly possible drumming frequency is reached, GOCOO increases the speed that even experienced galley convicts would cringe. The drummers show strengths of young Japanese musicians, usually only known from techno pioneers such as Ken Ichi.” Wiesbadener Kurier ”In the beginning, there was the fire – in the end there is GOCOO with a fantastic rhythmic orgy, that started in the bottom of the heart, that is wild, full of persuasiveness and power without denial of the own tradition. Fascinating? Exciting? Ecstatic? Yes, all of that but even more.” Frankfurter Allgemeine Zeitung ”Dark thunder fills the big hall, which increases to a flickering rhythmic-thunderstorm. GOCOO are 11 men and women, who brought the great Japanese drum tradition with unbelievable exuberance and overwhelming energy into our modern times.”