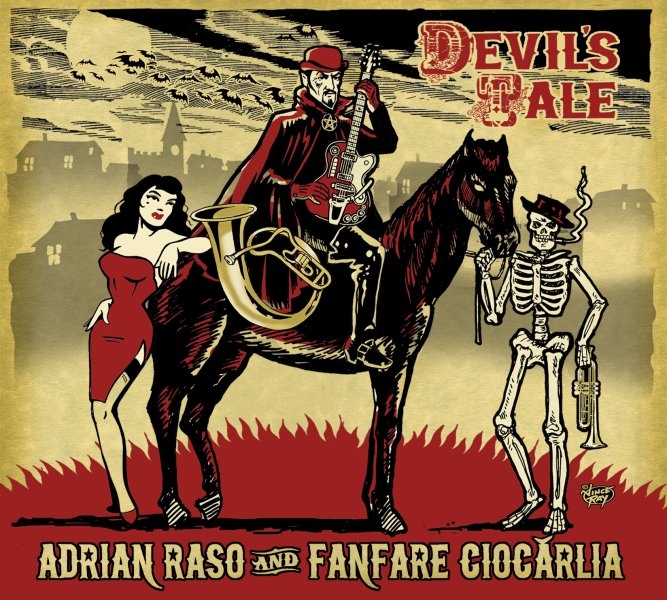 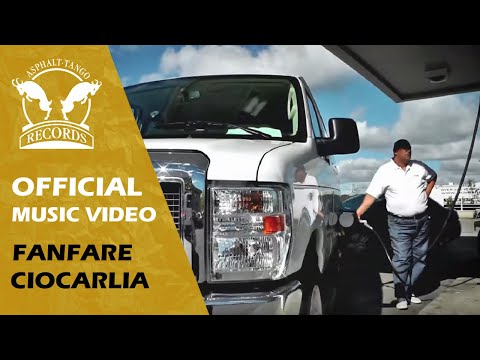 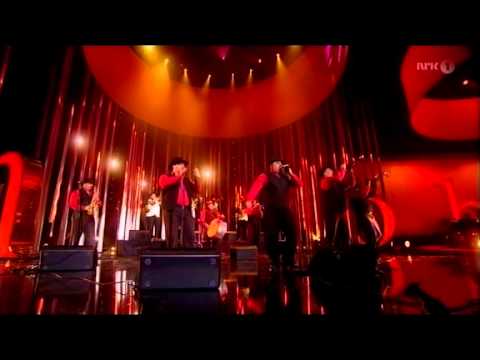 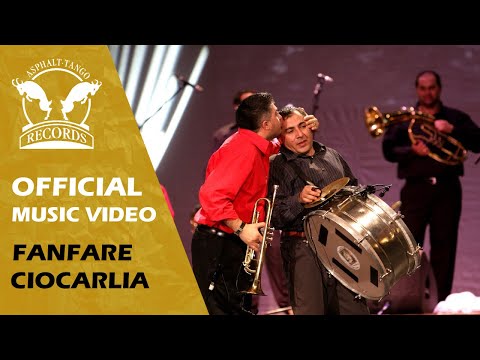 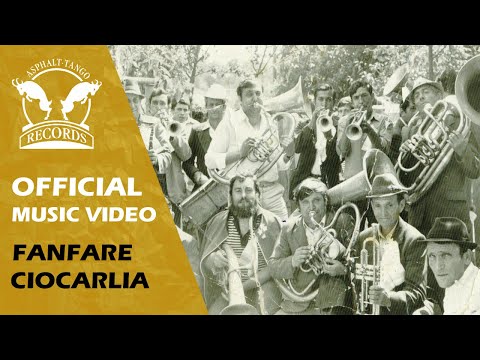 Int. Release date: 17th of January 2014 Lable: www.asphalt-tango.de Artist online: www.facebook.com/FanfareCiocarlia   Legend has it that the Devil likes to frequent crossroads, cutting deals for souls and spinning his cunning yarns. Yet not all crossroad pacts are diabolical; some are just damned brilliant. Take the crossroads encounter behind Devil’s Tale, where the eastern force field of Balkan brass meets Gypsy jazz guitar, as Romania's Fanfare Ciocarlia joins up with Canadian guitarist Adrian Raso. Fanfare Ciocarlia are a 24-legged brass beast whose eastern funk groove has torn up halls and festivals across the planet. Raso is a master guitarist, deeply versed in the French Manouche / Gypsy jazz stylings of Django Reinhardt. Could a string musician find a way into Fanfare's fierce Balkan brass blast? Could the legends of brass adapt their horns to the fluid eloquence of a jazz guitarist? The answer, as heard on this album, is one of brilliant defiance. Dig the rush: the Romanians and the Canadian have created a sound that rips and swings and roars. Adrian Raso has dreamt of this project for years. The gifted guitarist possesses a vast musical vocabulary rooted in Gypsy jazz yet, in his fleet fingers, capable of referencing metal, Latin, funk and his family's Italian tarantella roots. Raso built his virtuoso reputation playing Toronto's toughest clubs as a teenager. More than two decades later he remains on a musical quest that demands he challenge himself. The quest lead to him reaching out to Fanfare Ciocarlia - the Romany Gypsy orchestra from the "invisible" village of Zece Prajini in north eastern Romania - who blast a fierce, very individual brand of Balkan brass. Both Raso and Fanfare share a love of Django Reinhardt and big band jazz but initial concerns surrounded whether their very different backgrounds would allow for a common musical dialogue to ensure. "Meeting the band was a great experience," says Raso. "We bonded instantly. We joked about being separated brothers as it really did feel like that. Musically we understood each other from the get go." Fanfare Ciocarlia are the world's greatest Balkan brass band. When a band is at the top, the undisputed heavyweight champion, they have two options: either get lazy and repeat themselves or seek out new challenges. Fanfare Ciocarlia are hungry men and, having seen too many Balkan brass bands descend into the farce of playing-standards-too-fast or allowing tone deaf DJs to exploit them as decoration over a lame electronic beat, they chose to broaden Balkan brass's vocabulary. Meeting Adrian Raso gave Fanfare the perfect musical foil. Across several chilly Toronto days the Romanians and the Canadian came together. Raso called in several heavy friends to contribute to sessions. These included legendary guitarists John Jorgenson and Rodrigo (of Rodrigo & Gabriela) and rock drummer Kevin Figueiredo (of Extreme). This album - reaching down to New Orleans, across the Atlantic to Paris, deep into the Balkans and back through decaying Detroit to Toronto's grandeur - is the result. What wild beauty these men created! Raso's guitar sets off on a fluid journey, caressing and cajoling the horns who tell tales of a music that has ancestors in Africa and India, one shaped in old Europe and young America. Perhaps no one involved guessed such wild beauty would result from these sessions. Here it is: Adrian Raso and Fanfare Ciocarlia have created a music rooted in jazz and the Balkans, a sound full of history but looking towards the future. No clichés here - No gimmicks. Just obsessed musicians all determined to raise their game and chase sonic dreams. Spread the word - here is magic that might charm even jaded old Mephistopheles! more
PHOTOS 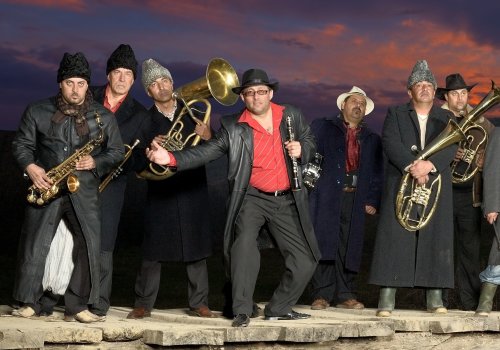 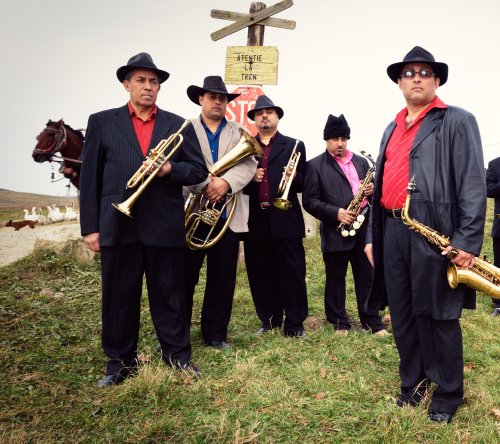 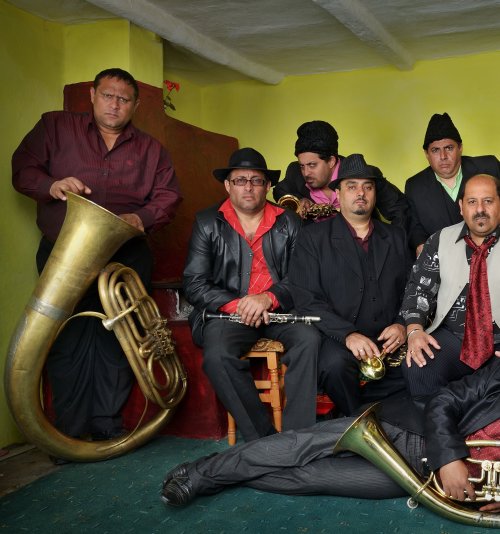 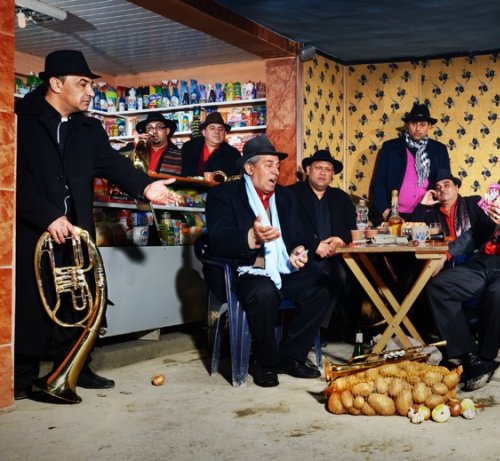 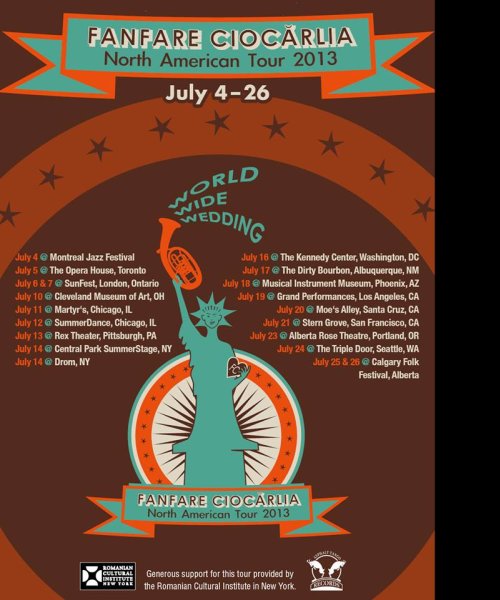 Fanfare Ciocarlia are one of the world's greatest live bands, their energy and ingenuity having won them fans from Melbourne to Memphis, Tokyo to Toulouse. Having learnt their craft at the feet of their fathers and grandfathers Fanfare's members proudly approach every concert as a challenge to both entertain audiences and keep the true spirit of Gypsy music alive.

When Fanfare Ciocarlia - the brass orchestra from the "hidden" village of Zece Prajini in north-eastern Romania - take the stage the crowd receive 100% Gypsy music. Zece Prajini's isolation - situated in a misty valley, the valley's dirt roads are occupied by flocks of geese and horse and carts; here live eighty Gypsy farming families who live a traditional rural lifestyle dictated by nature's seasons - meant that under communism the village remained hidden from the outside world. Somehow the ancient Ottoman tradition of brass bands accompanying armies, weddings and funerals continued to exist here when it had long died out in the rest of Romania. And when Henry Ernst, a young German music fan, wandered into the village in 1996 he found a living tradition that he knew the world would embrace.

And so they did: Fanfare Ciocarlia - whose name translates as "lark's song" - conquered Europe in 1997, their furious live blast appealing to punks and headbangers, jazz and funk fans, world music aficionados and those who simply love music that sounds absolutely unique. Even the classical world embraced Fanfare Ciocarlia and they have since performed at many prestigious philharmonic halls. The Romanian's breakneck speed, technical chops, ripping rhythms and sweet and sour horns is quite different from any other brass band on earth. Everyone who heard Fanfare Ciocarlia agreed on one thing - no brass band had ever played as fast as this before. Make that two things: no brass band had ever sounded like this before!

Fanfare Ciocarlia went on to conquer the USA, Japan and Australia. The Gypsies may only have spoken their local Romany dialect but their music spoke an international language and audiences responded to their fierce Balkan funk by turning concerts into parties. What Fanfare Ciocarlia played was something new. The Times of London described it as "a heavy, heavy monster sound" and Fanfare's recordings have taken their eerie Balkan groove into dance clubs across the planet.

Along the way Fanfare Ciocarlia have been celebrated by critics and championed in all kinds of media: they star in several films (Ralf Marschalleck's Iag Bari follows the band on tour across Europe while Fatih Akin's Head On has them ripping up Berlin's clubs), own the cover of Princes Amongst Men (Garth Cartwright's acclaimed book on Romany musical culture), were commissioned by Sacha Baron Cohen to cut biker anthem Born To Be Wild for the Borat soundtrack and have been sampled and covered, championed and emulated, by countless DJs, bands and Gypsy orchestras. Their radical reinterpretations of popular Western standards - including the James Bond Theme and Duke Ellington's Caravan - show how the Romanian orchestra effortlessly "Gypsify" any music they get their horns on.

Besides making great music Fanfare Ciocarlia have twice developed brilliant musical theatre - Gypsy Queens & Kings (which brought together many of Europe's greatest Romany musicians) and Balkan Brass Battle (which saw the Romanians face a Serbian orchestra) both toured the world to great acclaim.

Fanfare Ciocarlia have released eight albums, several of which have topped the European World Music charts. Their DVD Brass On Fire was acclaimed by Songlines magazine as "setting a new standard for music documentaries". They have played over 1200 concerts and like to consider themselves "the hardest working band in the blow biz". Put simply: nobody does it better, harder, faster, funkier than Fanfare Ciocarlia.