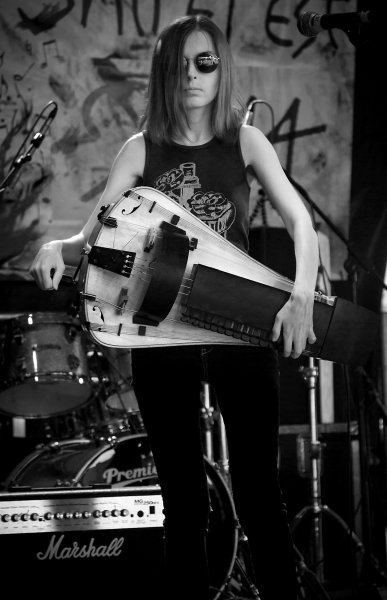 Waltz For Vera
by TANGERINECAT

Rise Of The Underworld
by TANGERINECAT

+ 3 more
ABOUT
"Watch out for: tAngerinecAt... this is some of the most powerful music I have heard in a long time, and holds a message too... difficult to believe there were only two musicians on stage. They manage a real art; creating sound which people enjoy..."
​
- LOUDER THAN WAR

UK-based electronic/post-punk/dark-electro/experimental duo tAngerinecAt create wickedly irresistible music at once dark, palpably cathartic, and pervaded by turbulent emotions.
​
Made up of Eugene Purpurovsky and Paul Chilton, who began collaborating together on various music and theatre projects in 2003 in Ukraine, releasing Fáinne Geal an Lae, Rise of the Underworld and Kuolema as Dark Patrick. The twosome launched tAngerinecAt in 2014, followed by releasing H.R V.I.P, Many Kettles, featuring the spellbinding “Roses from Blood.” and their most recent single "Something Broke Inside" Their four independently released albums received airplay on BBC 2, BBC 3 and BBC 6.
​
Ardent DIYers and self producing, both artists are multi-instrumentalists, who focus on live performances discharging dynamic music generating purgative, potent, passionate compositions reminiscent of ceremonial healing rites for listeners and the musicians.
Audiences equate tAngerinecAt’s performances to heart-piercing episodes akin to lightning jetting down the spine. Their inimitable sound mirrors not only their pilgrimage to the Ukraine’s Carpathian Mountains to study with local musicians and singers such as Mykhailo Tafiychuk, the last remaining maker of the duda – Carpathian Bagpipes, who taught Paul the art of playing the instrument which significantly shaped their style of playing on woodwinds, but influences from Soviet punk, rock, and post-punk bands such as Auktyon, Grazhdanskaya Oborona, Kino, Kalinov Most, Aquarium, Zvuki Mu, and Venya D’rkin.
Other musical stimuli include Gesaffelstein, Son Lux, The Haxan Cloak, Pink Floyd, The Doors, Nick Cave, Merzbow, Rokia Traoré, My Dying Bride, Paradise Lost, Haldolium, Sergey Kuryokhin, Son Lux, Nirvana, Joaquín Rodrigo’s Concierto de Aranjuez, Fever Ray, Sigur Ros, Brendan Perry, and Portishead, along with an array of drone and electronic music from all over and the films of Sergey Parajanov.
​
ABOUT


tAngerinecAt_Credit_Caroline_Julia_Moore
Aside from their influences, tAngerinecAt’s beguiling sound reflects and is informed by Eugene’s personal stories.
Founder of tAngerinecAt, non-binary Eugene Purpurovsky (he/they) plays hurdy-gurdy, Ukrainian bandura, writes lyrics and handles production. Originally from Ukraine, Eugene is a trauma survivor who battles with Complex Post-Traumatic Stress Disorder. He was abused in childhood by family members, some of whom were in the KGB. He grew up absent adequate food and warm clothing, essentially working as a slave for his parents and raising his two younger sisters. Subjected to grueling physical labor and exposed to radiation from the Chernobyl disaster, his health deteriorated.
​
At the age of five, Eugene began writing poetry, followed by writing songs when he was 10. Later, he studied at music school and then delved into orchestral conducting, musicianship and production in Music College in Kyiv. Aside from this, he studied theatre, stage speech, pop vocal, Ukrainian and Sean-nós (Irish) traditional singing. Since 1990, he’s performed nationally as a singer-songwriter, musician, and actor, including small clubs, theaters, philharmonic halls, and open-air festivals, as well as playing in a doom-metal and folk band, and gained national awards in music, poetry and stage speech.
Persecuted in Ukraine as LGBTQ+, anti-capitalist, anti-fascist, and for being a feminist activist, he was forced to leave.
​
Eugene's profoundly intimate lyrics confront themes of severe trauma, neurodiversity, childhood abuse, poverty, gender inequality, dehumanization, stigma, persecution, and the challenges of being a migrant from a poor post-Soviet country at war. Defined by authentic familiarity, Eugene’s verses replicate the reality he passed through, not ersatz encounters.
Paul Chilton (they/them) is English, non-binary, was born in Cheshire and lived in Ukraine for 18 years. Paul played guitar and keyboards from a young age, and later became fascinated with woodwinds and alongside Eugene attended lectures in traditional Ukrainian Carpathian music in the department of musical folklore at Kyiv National Music Academy. In tAngerinecAt Paul plays whistles, duda, harmonica, synths, performs spoken word and recently takes part in production and sound design. Musically Paul grew immensely under the guidance of Eugene who shared his skills and wealth of experience opening up new possibilities. It was the coming together of two crucially different cultures and worlds that resulted in such a unique musical project as tAngerinecAt.