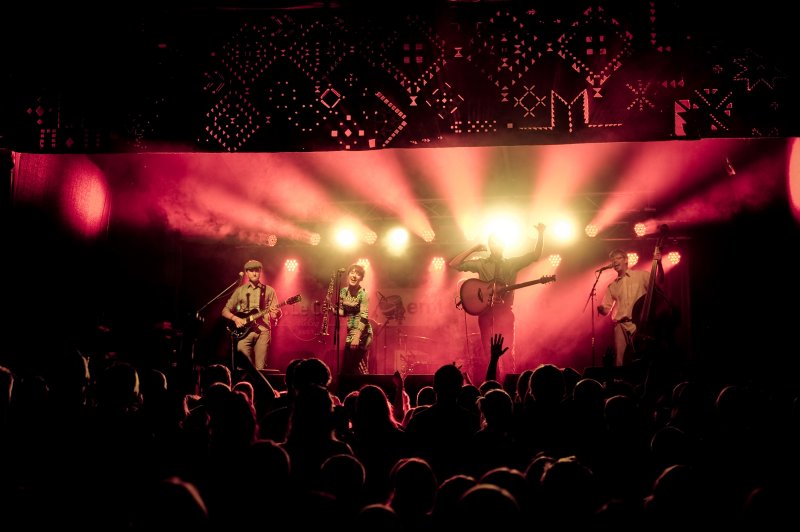 ABOUT
Individuality and fresh, even crazy ideas full of time-honoured traditions, contemporary textures and improvisational freedom make each of Paabel's show unique.

Having released their new studio album in 2012 and with the successful performances at the Tallinn Music Week, festivals in Estonia and Norway, Paabel was the winner of five Prizes out of six at the Gala of Estonian Ethno Music Awards 2012 (Best Band, Best Album, Best Song, Best Singer, Best Instrumentalist). They have performed extensively at home, and also elsewhere in Europe and the USA.Paabel uses authentic Estonian traditional music and, to put in a context that is understandable to the present-day person, borrows the means of expression from rock, pop and jazz.Paabel is a brainstorm, a free-spirited approach to traditional music, getting its inspiration from the band's internal synergy. Their music consists of old instrumental tunes, runic songs and original compositions, which are all intertwined.Experimenting with their limits, Paabel never forsakes a keen sense of style. Versatile musicians with great instrumental skills create a whole that exudes at once warmth, ferocity and youthful energy. Wild, experimental and multifaceted ideas offer spontaneity and surprises both to the audience and to the musicians themselves.The band, made up of five jazz and one folk musician, take the Estonian musical tradition that has been raised from archives, and intertwine it with jazz and rock, respecting the old, but not getting hung up on it too much. With their roots firmly in the ground, their chakras are open to improvisation."Our goal is to make the sort of music that we would listen to and enjoy ourselves — the joy and satisfaction of making music together is the main thing."Tarmo Noormaa, program director for the Viljandi Folk Music Festival:“For me, Paabel has always been an embodiment of youthful energy. The positive attitude of the band members is captivating… different tracks bring out all of their personalities. Individuality and fresh, even crazy ideas make each of their shows unique. Paabel enjoys performing, and improvisational musical humor.”Paabel was brought together to participate in a competition for reinterpretations of folk music in 2007, where they returned with the Grand Prix.Paabel was chosen as Best Newcomer at the 2008 Estonian Ethno Music Awards.In 2009, the band released their debut live album Epöpoa and a DVD of their national tour, Estonian Folk Fusion.At the 2009 Estonian Ethno Music Awards, Paabel received the award for Best Album and Sandra Sillamaa was named Best Instrumentalist.2010 saw the release of the band’s second album which was specialy made for theater play.2012 Paabel released their third album, first full studio-album "Üle Järve". The album contains songs which Paabel has enjoyed playing the most at their concerts during the last few years. These songs include progressive arrangements, simpler song games, instrumental songs and the so-called “Paabelesque” arrangements which are refined from songs developed during free improvisation sessions.Paabel has performed at every significant folk festival in Estonia, as well as holding concerts in Finland, Lithuania, Hungary and the USA.