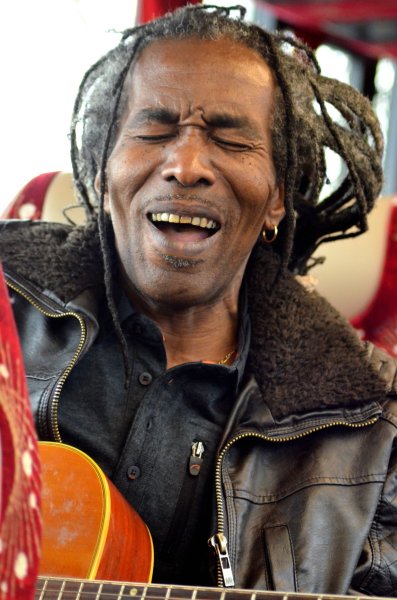 ABOUT
Golty Farabeau is a Roots Reggae and Sega musician from the Seychelles in the Indian Ocean. His music reflects the beauty and relaxed lifestyle of his homeland, his lyrics draw attention to learning to survive between the dregs of colonial influence and incoming socialist governments. A self-taught musician, Golty first toured professionally as a teenager, playing bass for a well-known Mauritian artis t.Since then has travelled widely across the world, becoming a major name in The Seychelles and well regarded for his compositions, rich voice and unique basslines.

His own chosen highlights include playing at the Montreux Jazz Fesival in 1993, his group making a Swatch advert in the same year, receiving a gold medal at the Isles Jeux de la Francophonie in Madagascar in 1997, playing alongside Bitty McClean in 2000, participating in Fete Afrique in 2002.

Golty settled in the UK 15 years ago where he formed his band Golty Farabeau and The Jahmadou. He has more recently played at the Cultural Collage Music Festival in Manchester (2012), Mintfest in Kendal and on the Albert Square stage at Manchester International Festival in 2013.

Golty Farabeau has produced eight albums and is currently working on a new one. He is currently planning an album tour with his UK-based band, The Jahmadou in 2015.