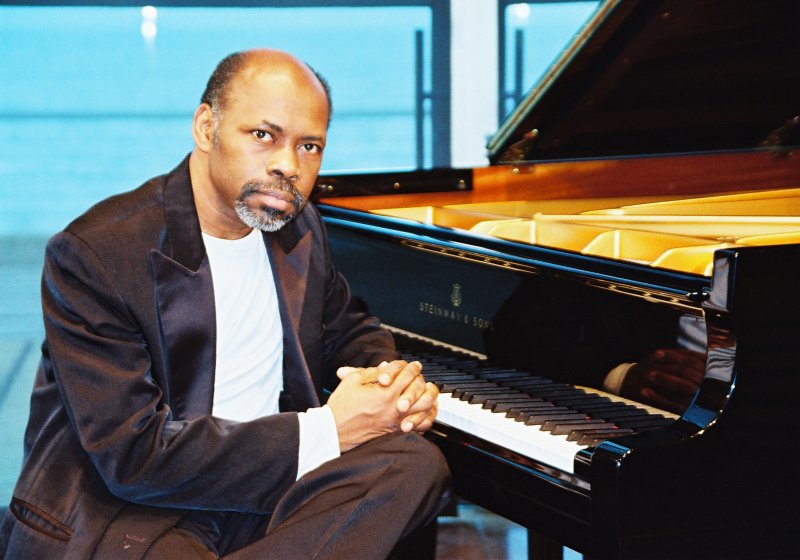 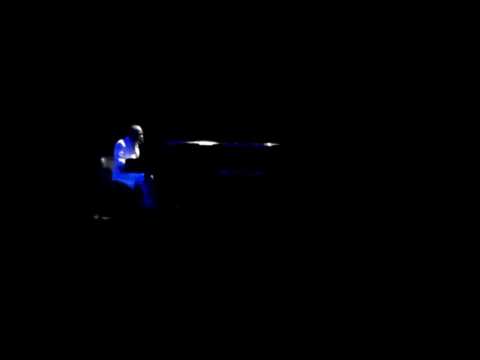 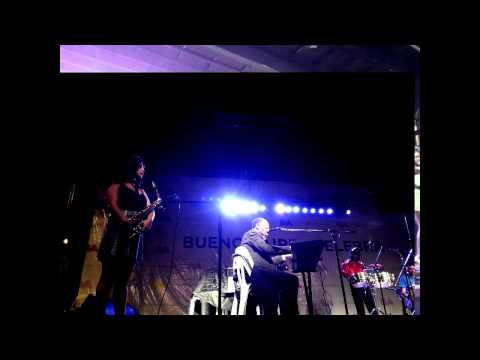 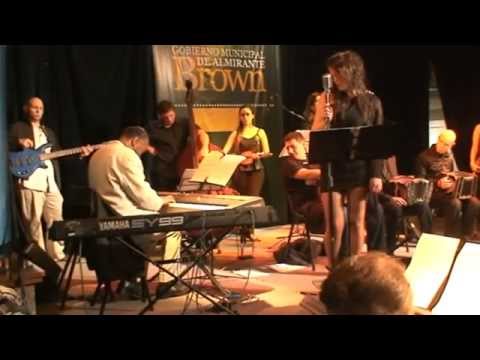 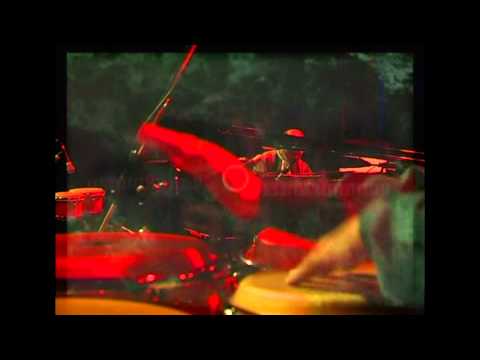 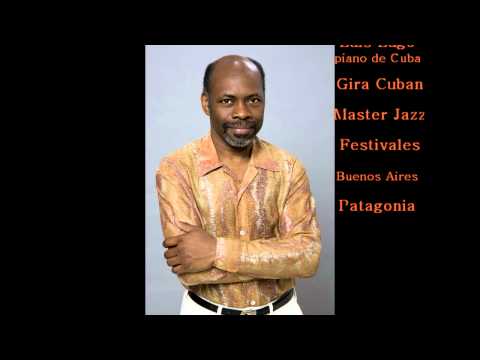 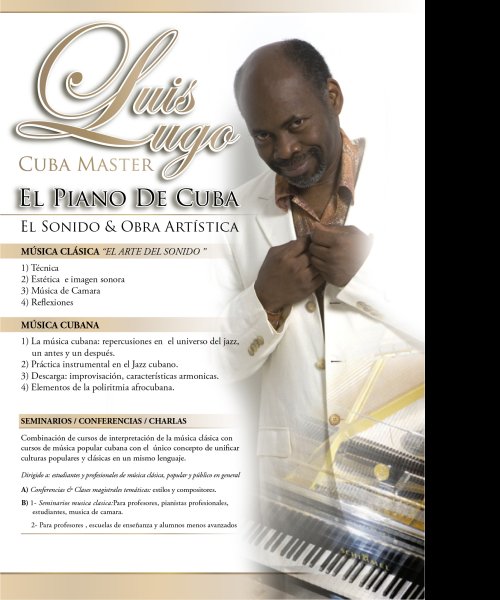 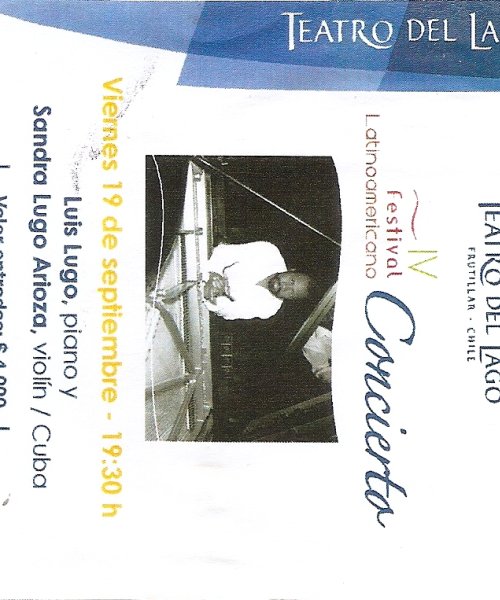 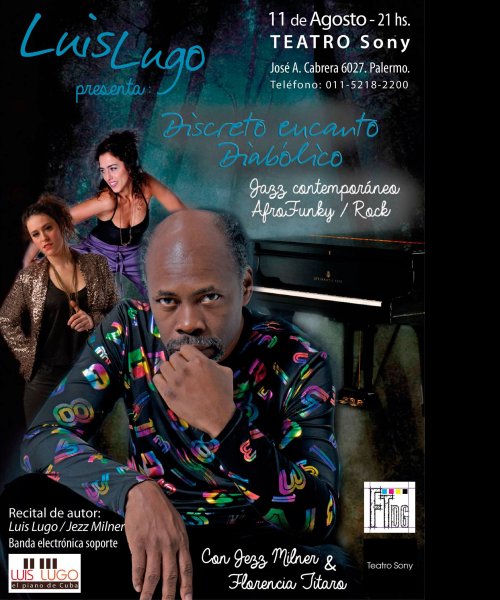 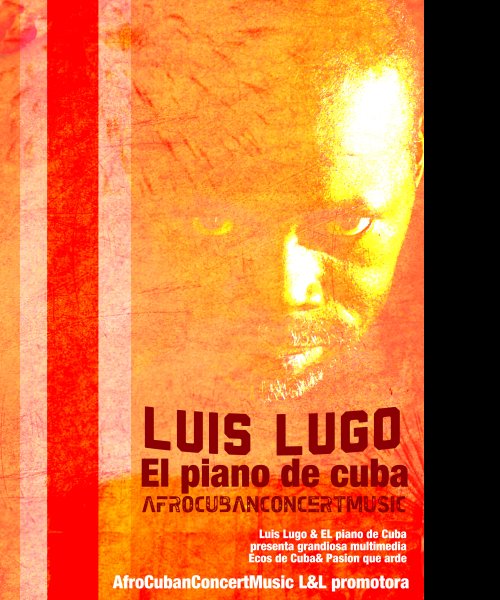 ABOUT
The Cuban pianist and composer Luis Lugo is one of the most prominent interpreters of classical and Cuban music. He possesses a long and outstanding trajectory in different countries in Latin America and Europe.

As a concert pianist (both clasical and popular) and arranger an afro-cuban jazz pianist, born and raised in La Habana

Lugo is one of the few artists in the world that can perform –in one same concert– from classical plays, such as Scriabin’s or Rachmaninoff’s sonata, to the most popular Ibero-American, Cuban or jazz repertoire, with a novel harmonic conception and virtuous creativity, while conserving a concert style in any of the fore mentioned genres. He is recognized by the media and specialized critics as being a giant of Cuban music at an international level and is considered “Cuba’s piano.”

Welcome to the official website of pianist and composer Luis Lugo Piano is Cuba . Discover his musical diversity, find out about his upcoming shows and latest news or simply enjoy listening to his performances

Theamazing concerts from maestro Luis Lugo, known as "Piano of Cuba" by specialist from several parts of the world media, are integrated with a powerful multimedia.

"...Lugo was able to show his fine technique playing Liszt, ending in this way the night of excellent music...", passage of "Luis Lugo and a spectacular night", La Opinión Newspaper of San Luis,Argentina. "...the great technique of Mr. Lugo allows him to interpret very difficult pieces in a fabulous way." Angel Vázquez Millares, Critic, Cuba. "...Lugo. His brightness and emotionality predict the virtuosity of the unrestrainable romanticism of the XIX Century." Leo Brouwer, composer and Director of the Phylharmonic of Cuba and Director of the Symphonic of Córdoba, Spain. "...He has a certain possibility to interpret concerts, due to his relevant technique and his emotive sensibility..." Dr. Robbone, President of the International Piano Contest in Viotty --Italy. "...With his appealing interpretative quality, he expresses temper together with an understanding of the styles of the pieces he performs" Mtislav Smirnov Vice-rector of the Tchaikovsky Conservatory of Moscow. "Having been at Mr. Lugo's concert at the Colon Theatre in Buenos Aires, I was able to appreciate his technical possibilities and the beauty of his tone pallette, that amazingly ranges from pp to ff, and makes us consider as positive the fact that his native country has contributed to his international carreer, in order to let him develop all the potential this artist has". Elsa Puppolo (Argentinian pianist) ...Throughout all the pieces he showed in an increasing way, a complex management of the virtuosism. This pieces written by great virtuous men, need also to be executed by a great virtuous musician. And that was what Luis Lugo showed to be. We do hope to see him again at the Great Hall of the Colon Theatre." Jorge Argiles, argentinian pianist and piano profesor. Luis Lugo was born in Havana, Cuba.He began his studies at an early age and continued for eleven years at the Provincial School of music "Amadeo Roldan" of Havana. He entered the Moscow Tchaikovsky Conservatory in the class of the Honourable Professor and Emeritus artist of Russia Rudolf Kerer.He obtained the titles of concert pianist, a degree in music, Professor, and the special provision "Master of Fine Arts" from the Tchaikovsky Conservatory in Moscow. He has performed in Spain, Italy, Russia, Great Britain, Angola, Cuba, Chile,Brasil, Uruguay, Ukraine,Switzerland, Argentina and others. In addition to his activities as composer and pianist, Lugo has developed an intense teaching activity. His students have been winners of awards in various piano competitions at international and national level in Argentina. He is regularly invited to give lectures and magisterial classes of music,aesthetics of piano and technical pianistic at numerous universities.