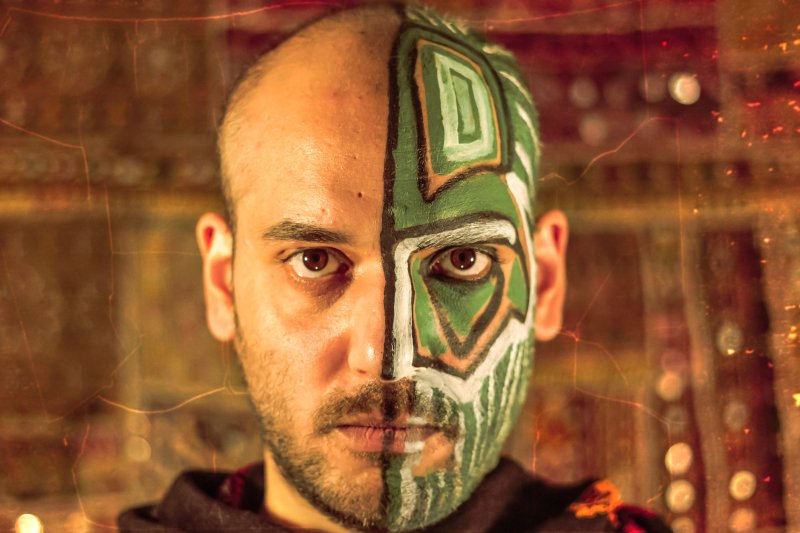 ABOUT
Tamer Abu Ghazaleh stands out as one of the few to imbue the region’s sound with sentiments of fury and restlessness. A cross-genre composer, multi-instrumentalist, songwriter and a producer within a generation pushing the boundaries of Arabic styles and rhythms, whilst being exposed to worldwide influences.

With Oud and Buzuq as his instruments of choice, Abu Ghazaleh melds virtuosity with fierce experimentation in composition and songwriting. As a performer, his inventiveness is taken further with trance-inducing interpretations, often imbued with sharp satire, giving him the air of an irreverent modern day troubadour.

Whether penned by him or borrowed from a distinct choice of contemporary poets, Abu Ghazaleh is drawn to texts for their linguistic charm and the rhythmical challenge of setting them into song, which he brings to life with vocal prowess, lush harmonies and gutsy modal twisting.

He has been performing his latest project since 2012 at sold-out concerts in Beirut, Alexandria, Cairo, Amman, London, Ramallah, Tunis, Constantine, Liverpool, Manchester, Budapest, Oslo, Stockholm, Copenhagen, Malmo and Arles with Khyam Allami on drums, Shadi El-Hosseiny on piano and Mahmoud Waly on bass.

A prolific collaborator, in 2012 he co-founded the critically acclaimed alternative band Alif with Maurice Louca and Khyam Allami; produced Maryam Saleh’s debut album Mesh Baghanny in 2012; collaborated with Yacoub Abu Ghosh on his album As Blue as the Rivers of Amman in 2011; started the cross-genre group Kazamada in 2010 with Zeid Hamdan, Mahmoud Radaideh and Donia Massoud; released ”Thawret Ala” (Revolution of Anxiety), a collaborative piece of musical theatre performed by Al-Tamye Theatre Group in 2008; worked with Palestinian and Egyptian artists on Jehar with Huda Asfour; collaborated in Duo Buzuq with Rabea Jubran and in Kalam Mazzika with Salam Yousry and performed on Khaled Jubran’s Psalms in 2005.

Abu Ghazaleh produced his second album Mir’ah (Mirror) in 2006 when he was 20 years old, eventually releasing it in 2008. The record’s seven turbulent, and sometimes frenzied songs were written during the unrest of the second Intifada. Composed during curfews, they were informed by the unreal experience of living in Palestine during that period. His first album, Janayen El Ghona (gardens of song) was released in 2001 encompassing songs he produced between the ages of five and 15. In 1991, Abu Ghazaleh released his first single, Ma Fi Khof (no fear) that went on to be widely chanted in protests during the first intifada.

In 2007, he founded the pioneering independent music organisation eka3 as an incubator for Arabic music businesses, currently housing a record label (Mostakell), a booking agency (Almoharek), a music reviews magazine (Ma3azef.com), a music licensing agency (Awyav) and a music PR and communications agency (Simsara) - services that hardly existed in the region before the advent of eka3.

Consequently, Abu Ghazaleh has had to take a step back from producing his own albums for eight years, only to re-emerge in 2016 with the much anticipated Thulth (Third), due to be released in May 2016 via Mostakell.

Abu Ghazaleh was born in Cairo 1986 to a Palestinian family. He started singing and performing at the age of two, and composing at the age of nine. In 1998 he started his music education at the National Conservatory of Music in Ramallah (now Edward Said Conservatory). There he studied oud, buzuq, music theory, history, analysis, composition, arrangement and performance, under the supervision of renowned Palestinian musician Khaled Jubran.