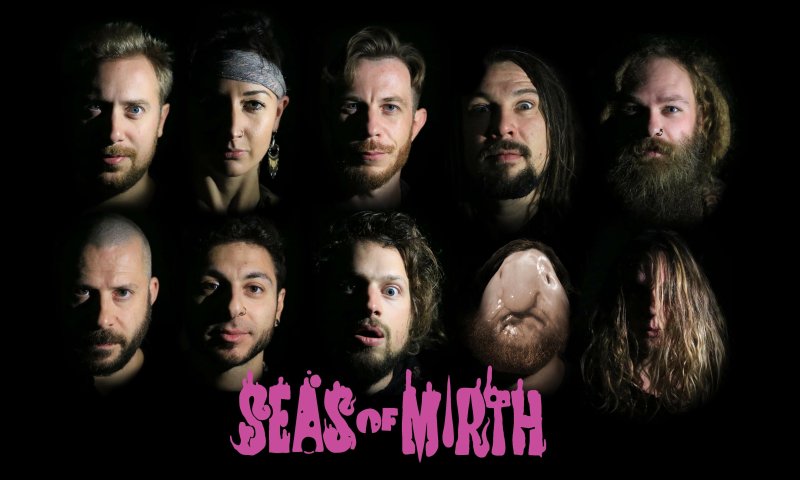 Happy Hour At El Squid Diablo
by Seas Of Mirth

Tug Of Whores
by Seas Of Mirth

Phantom Vessel
by Seas Of Mirth

Fog
by Seas Of Mirth
Followers

ABOUT
“A completely refreshing and encouraging type of ridiculous” – Fatea Magazine

Seas of Mirth have been stamping their own mark on modern music for the last decade, mixing up styles and song structures while also being known for their watery twist. The band have taken their sound to a new level on their third full-length album. Recorded at London’s Total Refreshment Centre by producer Kristian Craig Robinson (known for his work with The Comet Is Coming, Flamingods, Alabaster dePlume) Sub Marine Dreams is a deep-ocean inspired odyssey and various sub marine themes lurk within each of the ten linked tracks.

The nine-strong ensemble and extensive instrument checklist remains intact. Xylophone, bouzouki, clav organ, accordion, and theremin are all present (to name a few), joined by a shoal of effects and watery samples. The sonic span widens into areas of psyche, dark funk, jazz, disco, ambient, latin and chime-pop – a far cry away from the galleonic jigs that made up their 2016 outing Hark! The Headland Approacheth.

The band are taking their most ambitious 45 minutes of song craft on tour in 2020. Live, there is a huge emphasis to bring the tunes to life in an enthralling sensory experience made possible with big luminous sea creature props emerging through the course of the set, and a good old-fashioned tug-of-war to boot. Seas Of Mirth have played at some of the UK’s biggest festivals and have enjoyed many tours in the UK and Europe.