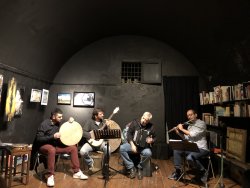 Italy
Tracks
Videos
Photos
About
Cando Pinso Al Mio Turmento
by Khaossia Ethno Ensemble Salentina
Influence: West European
Genre: ancient, world music, khaossia, salento, venezia,
share
repost
comment
buy
add to favorites
About "Cando Pinso Al Mio Turmento"
Khaossia dress up as galley slaves on board the ship of Hannibal Basalù, Consul for the Republic of Venice in Otranto in the 16th century. In his company, they start an imaginary journey towards the sunny coasts of the Land of Otranto, starting from the living rooms of the rich and opulent Serenissima and touching the ports of the Sea State (Stato da Màr), the lands over which the lion of Saint Mark ruled.

For hundreds of years the Venetian predominance in the Mediterranean was not only political and economic. In fact, the Serenissima's wise and interested tentacular hand allowed lands, not matter how distant, to enter into contact with each other and exchange cultural influences. They were mainly people who had in common another element, the sea, which was considered a source of wealth, life and artistic inspiration.

The music pieces were composed using as an inspiration the imaginary atmospheres of the ports visited by the galleys, and trying to highlight in each place, metaphorically represented by a piece of music, a common denominator, namely the marine and Mediterranean DNA.

Once again, Khaossia drew from ancient repertoire, by bringing back and reinventing in folk style four "Grechesca" (a kind of "villanella" of burlesque, colourful and heterogeneous character) originally published in 1571 by the Venetian composer Andrea Gabrieli. The texts, respected by Khaossia in the execution, were composed by eclectic Antonio Molino also known as Burchiella - a representative of the stradiostesca literature. They use a sort of linguistic fusion of Venetian, Istrian, Dalmatian and Greek. Molino was a comic actor, a poet, a composer and a professional merchant, the perfect travel companion for Khaossia.

The journey's destination is the Land of Otranto, where the Venetian community was already present in 836 when they used their warships to help the Longobards and the Byzantines to protect the Adriatic coast from the Saracen pirates. The Venetians settled in Salento between the 15th and 18th century, immediately taking over public roles in order to protect their own commercial interests and secure valuable ports. The signs of this forced "brotherhood" between Venice and the Land of Otranto are still evident today in the Palace of the City Government in Lecce and the chapel of San Marco with its inevitable lion. Among the many Venetian families that settled in Salento, Khaossia have chosen to travel with the Basalù, a restless family with an intriguing history, who ruled the city of Otranto for years.

For this CD, the Salento band brought together friends of different backgrounds and training, in addition to the core group consisting of Luca Congedo, Fabio Turchetti, who composed and arranged the tracks as usual, and Stefano Torre. The goal was to recreate, even at the time of recording, the atmosphere of random encounters between different musicians, mostly amateurs and merchants, which took place in the Mediterranean ports. Surreal atmospheres recreated by putting together musical instruments, which were distant both in their genre (refined and popular) and in space and time. Renaissance flute, Cretan laouto, violin, tambourine, accordion, guitar blend naturally together in this CD.

See all tracks (6)
Follow
Send Message
About
The ensemble was born in 2005, in response to the desire of public and private bodies, as well as individuals with a passion for the southern folk genre, for a band representing the Salento region and its musical traditions in Lombardy. It comprises musicians who specialise in a number of genres, including ethnic and folk music from Salento in particular. Khaossia position themselves as a meeti... more
Influence
West European
Genre
pizzica, tarantella, world music, apulia world music, salento world music
Other Pages