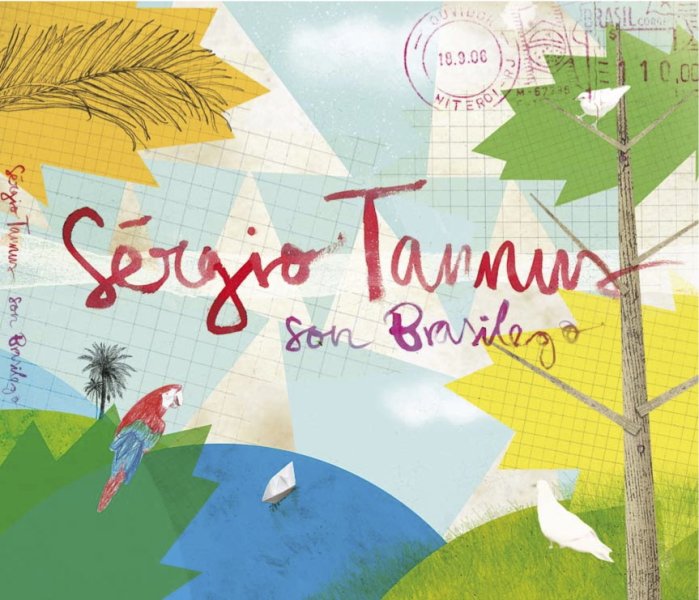 Eu To Alegre
by Sergio Tannus

ABOUT
Sérgio Tannus is one of the most accomplished artists of the Brazilian musical world. Skilled in playing a range of different instruments, such as guitars, violões, bass, cavaquinho, bandolín and percussion, as well as a self-taught musician, Tannus has developed his personal style in his quest for new sounds, connected to universal influences, without forgetting his Brazilian roots.

Since 2006, Sérgio Tannus has been living in Santiago de Compostela (Galicia, north-west of Spain), from where he is currently promoting his work as a multi-instrumentist and singer-composer throughout different European countries.

Since his arrival in Galicia, he has been sharing the limelight with many different artists, both as an accompanying musician, and as a producer: Uxía, Antonio Zambujo, Carlos do Carmo, Chico Cesar, Lenine, João Afonso, Kepa Junkera, among others. He also co-produced and recorded some very successful children´s albums (“Maria Fumaça” and “Rosalía pequeniña” both with singer and producer Uxía) and produced Olga Brañas’ “Pitusa Semifusa”. He also took the stage in theater plays, such as “Ordem e Progresso”, together with Galician comedian Carlos Blanco.

Since July 2013, Tannus added another important project to his already impressive curriculum, by accepting the invitation to join Dulce Pontes’ band and world tour. The tour with Pontes, one of the most relevant and famous voices in Portugal and the world, passed through many European countries before the partnership ended, so that Tannus could focus his energy on his solo career.

Following a period of many collaborations and joint projects together with other artists, in 2012 he brought forth the project of his new album, “Son Brasilego”. A large-scale project, featuring a high number of collaborating artists, with the Sérgio Tannus Trio, as always, as its solid base. In “Son Brasilego”, Tannus is also accompanied by all the Galician artists who have known him and shared with him great musical moments throughout these last years that he has spent living in Galicia.Moreover, other artists from Portugal, Brazil, Angola, etc. who have shared in Tannus’ artistic trajectory during this time are also featured in this project, thus creating an authentic musical bridge that unites Portuguese-speaking countries, especially Galicia and Brazil.

“Son Brasilego ” banks on mutual exchange, on bringing together cultures and people, on the fusion of ideas, on common rhythms and roots. Moreover, it is an intuitive kind of music that reflects on our identity and brotherhood, as well as, most of all, on the future of these traits through music and through that Atlantic sound which makes us all “brasilegos”.But, most of all, this album is a gift, an expression of gratitude towards all those musicians and friends who have made possible Sérgio Tannus’ musical and artistic development on this side of the Atlantic Ocean.