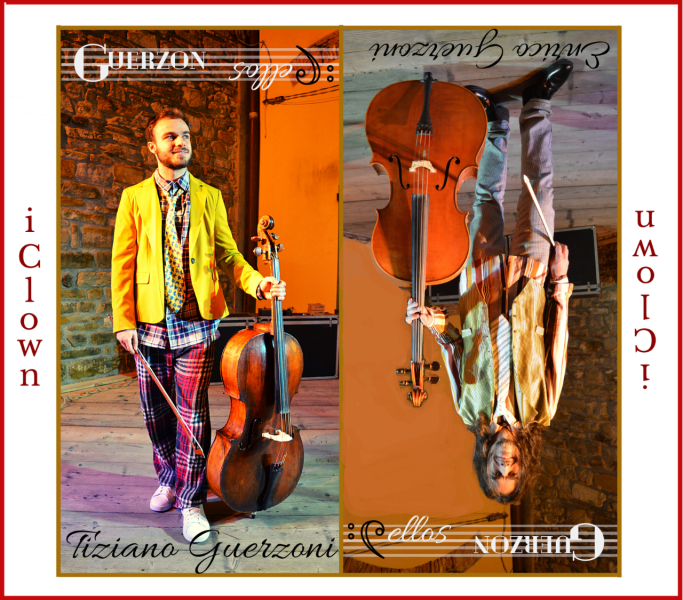 In The Mood For Love
by GuerzonCellos

Breaking All The Illusions
by GuerzonCellos

4567
by GuerzonCellos
See all tracks (10)
Followers

ABOUT
Father (Enrico) and son (Tiziano) Guerzoni, cellists involved in songs ranging from baroque to jazz and rock, including original compositions. They give life to an extraordinarily unique concert, where music has neither gender nor age, but only different colors. The band was born between the walls of the house since Titian asks for his first cello as a gift. Since then in 2009 with the "Septem Musici" he won the first prize of ancient music of Padua and in 2010 and 2011 in duo with pianist Nicolas Giacomelli won the first prize in the competition at Pianoro (Bo). In 2016 he obtained the cello diploma with honors and a special mention at the Conservatory of Bologna. He has already performed numerous concerts as first cello with chamber orchestras such as Arkè Orchestra, Cembal Orchestra, orchestra Senza Spine, Dalla Classica, Conservatorio di Lipsia and Lorelay in Germany often playing the role of soloist and first cello, performing in the "solo" of the Four Seasons of Vivaldi, in Don Pasquale, in Tosca and Guglielmo Tell. He has in his repertoire the concerts for cello and orchestra by Schumann, Dvorak, Shostakovich n.1 and Haydn n.2 which he performed with the orchestra. He performed at the cello biennial in Amsterdam and Barcelona with the group of cellos by Giovanni Sollima, of which he performed as soloist "Violoncelles Vibrez" at the Teatro Comunale of Bologna and in that of Erl (Austria). He is currently attending masters courses at the Pôle supérieur d'enseignement artistique in Paris and the Accademia di Santa Cecilia in Rome. Enrico, an eclectic cellist and composer, with countless professional experiences and high level collaborations in every field and genre: B.McFerrin, Teatro Comunale di Bologna, Solisti Veneti, L.Pavarotti, R.Muti, M. Nyman, Trilok Gurtu, Zucchero, Arkè String Quartet, P. Fresu, A. Ruggiero, F. Battiato, A. Bocelli, and many other collaborations both in Jazz and in Pop that of chamber music and first cello in Italy and abroad. The arrangements are all made by them. The repertoire can be performed in acoustic with acoustic instruments or amplified with both acoustic and electric instruments. They have performed in festivals such as "Farnesian Musical Encounters" (Pr), "Via Julia Music" by Mauthen Austria, Klagenfurth "VolxHaus" Austria, "Notes in the forest" Andalo (Tn), "Eco della Musica" of Bologna, "Altotasso Music "" Bologna, "Music Valpolicella" San Giorgio Valpolicella, "Calici di Stelle", Rimini, "IV Musical review of Palazzo Grassi" in Bologna, "Recondite Armonie" Brisighella (RA), "The protagonists of Italian jazz" in Lagonegro / Sant 'Arsenio (SA), "Knowing the Music Magic nights at the castle" Minerbio (Bo), "Musica Insieme / Borghi e Frazioni " ,San Pietro in Casale (Bo), "Summer evenings" (Sonoris Causa) Parma, Monghidoro (Bo) "The concerts of Cisterna", "Live Music" Fai della Paganella (TN), Cesenatico "Notturni alle Conserve", "Borgo Sonoro" (FC), GuerzonCellos-Black Afrique, S.Lazzaro (Bo), Groovin Check Jazz, Castello di Spezzano (Mo). In January 2016, they were invited by the Italian Institute of Culture in Beijing to perform in China. In 2020 they played concerts in France (Bellenaves, Lyon) and Austria (Gewerbepark Kötschach-Mauthen). In 2015 their first CD was released: GuerzonCellos. In 2020 was released their second CD: iClown.