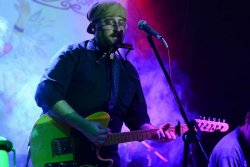 Brazil
Tracks
About
TRACKS
Last Call For You
by Alex Escher Boger
Influence: North American , West European
Genre: folk
share
repost
comment
buy
add to favorites
Follow
Send Message
About
Singer and composer. After playing in some bands in the Region, Alexandre Escher concluded in 2014 the recording of his first solo album, titled Phyxsius, which gave him digital distribution of his songs by the main musical platforms As well as two trips to present his work in the United States and France.

In his artistic career he had the opportunity to perform in Belém... more