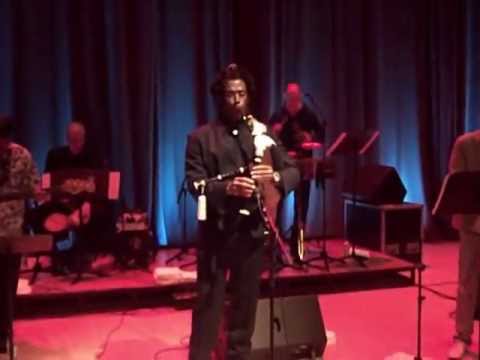 ABOUT
Wilber Calver is a bagpiper from Cuba, of Cuban-Jamaican origin. His sound is an elemental force. His sheer presence in live performance, such as an appearance at the Aldeburgh Festival in 2010, leaves a powerful effect on listeners.

""Wilber Calver is a unique new artist who has created a brilliant original sounding album that is steeped in the traditions of his Cuban culture and the Celtic folklore of his chosen instrument the bagpipes. I can't stop playing it." COURTNEY PINE CBE

“"He's achieved a natural integration of these two disparate sound-worlds in a way that convinces you he is more genius than mad .. Cumbanchero stands out as a brilliant demonstration of taking an instrument into new territory" SONGLINES Magazine

In late 2009 he met pianist/producer Alex Wilson who was then producing the award-winning Mali Latinoproject. Both based in Switzerland, the pair worked together over the next two years to formulate the concept for Diaspora, delving deep into African diasporic rhythms and making connections with Celtic and Galician traditional melodies.