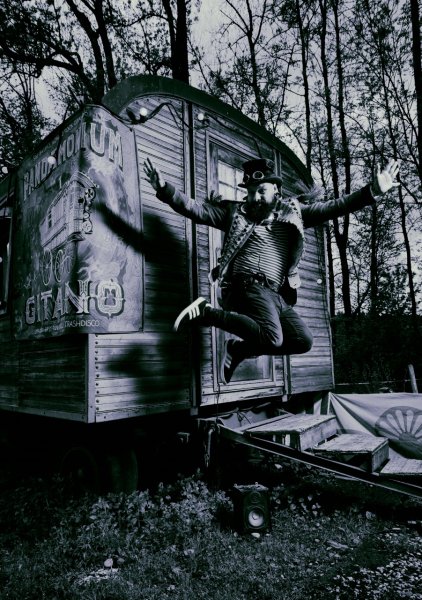 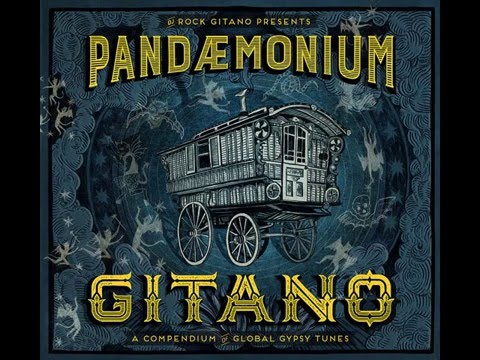 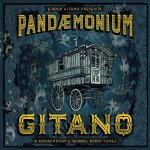 It took a while, but now it’s here: Rock Gitano is bringing out his very first compilation. Some may know the guy from Zurich and his wild side from his early days, others from the crazy Zurich night life. But no one knows the man behind the mask. The one driven out, the restless one, the one first shunned by society then adopted, only to run away again. One of the last true punks, bearing a thousand tons of attitude. Rock began his career as a DJ more than 20 years ago. First as an electro DJ at all sorts of parties, later in the legendary Zurich club “ Dachkantine ”. But eventually, he went back to the music of his roots. To the music of the travellers that had accompanied him his whole life long, to the music of his soul, he being a traveller himself. Ever since, he calls himself simply Rock Gitano . Rock Gitano has played in all the trendy clubs and venues in Zurich as well as throughout Switzerland; he can also look back on a number of regular gigs abroad, including Berlin, Munich and London. Following on the heels of diverse collaborations and lengthy friendships with various touring bands and boozy club nights, Rock Gitano is now venturing a step further into pandemonium with the first compilation he has ever put together. Pandemonium Gitano is a perfect mix of Balkan folk songs, coupled with electronic beats and modern influences from the West. And when Rock issues the invitation to dance, then of course, they are all there: his buddies from Palko Muski , Gypsy punk legend Eugene Hütz with his cohorts from Gogol Bordello , the splendid Amsterdam Klezmer Band and other heroes from the global dancefloor. At times playfully electronic ( Äl Jawala , Gypsy Sound System ), at others organic with a groove ( Terno feat. Mahala Rai Banda , Jaro Milko & the Cubalkanics ), and always with just the right portion of punk ( Russkaja , The Dreadnoughts ). Fresh, lively music that makes you happy or as Rock himself says about his DJ sets, “It’s about love! It’s about peace! It’s about craziness!” The CD is published on Swiss indie label, Jasha!Records , which was just launched in 2016 with the mission of bringing Gypsy/Roma music closer to those who want to hear it. Rock Gitano ’s " Pandemonium Gitano " is available as a CD and digital download.   Tracklist   1. Palko Muski – This Way (Switzerland) 2. Terno feat. Mahala Rai Banda - Romani Gili (Poland/Romania) ( Exclusive ) 3. Boom Pam - Ars Meduplam (Israel) 4. Round Table Knights feat. Reverend Beat-Man – Cut to the Top (Switzerland) 5. Äl Jawala - Heart Overload (Pelletronica&Sumakari RMX) (Germany) ( Exclusive Version ) 6. Gogol Bordello – Pala Tute (USA) 7. Amsterdam Klezmer Band – A Sheine Velt (Radio Zwarte Cross Version) (Netherlands) ( Exclusive Version ) 8. Russkaja – Energia (Austria) 9. Offchestra – Bajram (Kosovo) 10. Gypsy Sound System - Press the Balls (Switzerland) 11. Gypsy Hill - Balkan Beast (UK) 12. Jaro Milko & the Cubalkanics (Switzerland) ( Exclusive ) 13. Jaakko Laitinen & Väärä Raha - Murhamiesten Markkinoilla (Finnland) ( Exclusive ) 14. Haris Pilton & Gypsy Sound System – Gitanos (Switzerland) 15. Kumpania Algazarra – Pudim (Portugal) 16. The Dreadnoughts - Polka Never Dies (Canada) more
Followers

ABOUT
The master blaster from Limmatstadt. Punk rebel from the very beginning and Balkan beat/Gypsy punk DJ as a calling with Yenish roots. As they say in Zurich: Rock Gitano is as much a part of Balkan parties as the moustache is to Eugene Hütz of Gogol Bordello.

Rock began DJing in the 1990s as an electro DJ. Later he was often present in the Dachkantine, the former flagship of the Zurich electro scene, and was responsible for a legendary party or two.

But he could never let go of his roots, not even musically. At some point Rock traded in his electro discs for the wild music of the travellers, and ever since has added "Gitano" to his name.

His sets are a crazy potpourri of Gypsy music, punk, disco, rap and Klezmer. Call it Romanian swing, albo ska, Greek hotstep or drum'n'brass – it’s the perfect mix of Balkan and Eastern European folk music paired with electronic beats and modern influences from the West. Fresh, lively music that makes you happy... or as Rock himself says, “It’s about love! It’s about peace! It’s about craziness!”