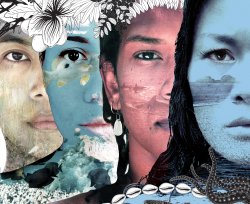 For our mangroves
Mangroves are one of the Earth’s most precious but maligned environments. Koyawa sings and dances, celebrating his mangrove coastline. Mangroves capture twice to four times as much CO2 per sq. m than any other environment.

*Tsuana – Tsuana is the traditional mans meetinghouse where the chiefs meet.


Recorded and produced in the field, from the grass roots up. Small Island Big Song is independently owned & managed - A living album, an oceanic songline.

Profit made from the album
1 Fair Trade - 50% of net profits are distributed to the artists & NGOs.
2 All artists are treated equally on two tiers, feature or session artist.
3 Acknowledging Intangible Cultural Heritage as defined in The United Nations Declaration on the Rights of Indigenous People by giving selected NGOs (by artists’ choice) a share in net profits.

See all tracks (18)
Follow
Send Message
About
Here you will hear those who sing for the seas.