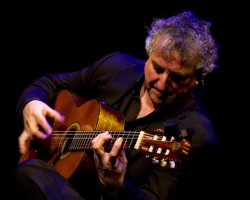 Spain
Tracks
Videos
About
Calle De La Tina
by EDUARDO NIEBLA
Influence: Mediterranean
Genre: flamenco, rumba
share
repost
comment
buy
add to favorites
About "Calle De La Tina"
This is quite an old composition of Eduardo Niebla's, composed whilst staying in Granada in a beautiful area called Albazin - it's named after the street in which he was stayingl

In a career spanning four decades Eduardo Niebla has been acclaimed as one of the most potent forces in flamenco jazz fusion today and his lyrical, poignantly poetic and wonderfully virtuosic playing has electrified audiences all over the globe. His concert appearances have included the Jaipur Festival India, the Queen Elizabeth H... more