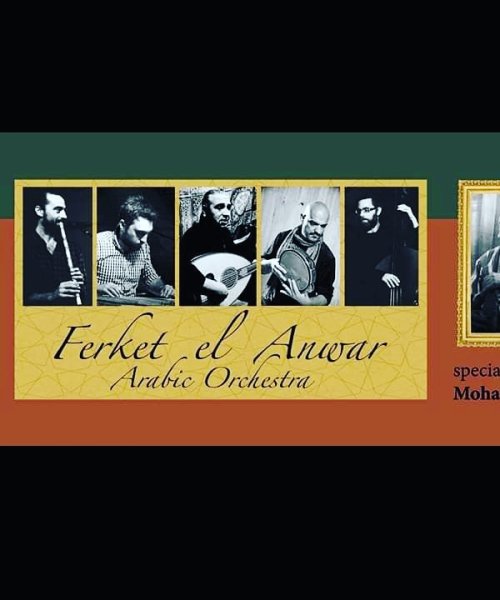 ABOUT
Ferket El Anwar" in Arabic means Orchestra of Light. It is an orchestra founded in 2016 in Athens (Greece) and performs traditional, classical and contemporary Arabic music from the Near and Middle Eastern countries, in compositions dating from the Middle Ages to the 20th century.

This type of orchestras, which in Arabic are called "takht", evaluated since the Middle Ages and they represent the room orchestras of Arabic classical music of that time. The sounds of historical instruments such as the oud, the qanoon, the nay, the violin (or the lyre - keman) and the percussion, combined with oriental long-lasting melodies and poetry, lead the ensemble of musicians and the audience to the "tarab", the mental euphoria and spiritual clarity that one feels when listening to these sounds. In other words, the sacred ecstasy of music, as the 11th - 12th-century Persian philosopher Al-Ghazali says.

Traditional, classical and contemporary Arabic music are closely related, since they share common characteristics such as scales"maqamat" and rhythms "awazan". The repertoire of the orchestra follows this historical development, including all three different genres.

- In the traditional part there are songs of local Arab folk dances, such as "Dabke" and "Dalaouna" from Syria, Lebanon and Palestine, "Chobi" from Iraq, "Khaleeji" from the Arabian Peninsula, “Fellahi"and "Saidi" from Egypt and "Maghrabi" from Morocco.

-The classical repertoire presents improvisations and compositions in forms formed from the early Islamic era of the 8th century to the later Ottoman times of the 19th century, such as Muwashahat, Taqasim, Samai, Tahmilah, Dolap and Longa.

- Finally, it would be impossible to miss great works by the finest contemporary composers and performers of the 20th century, such as Mohammed Abdel Wahab, Oum Kalthoum, Zakaria Ahmad, Abdel Halim Hafez, Farid el Atrash, Sabah Fakhri, Fairuz, Rahbani brothers and many others.

The aim of the orchestra is to present a wide range of music from the Middle and Near Eastern countries. To highlight the common cultural elements and ties of the people of the Eastern Mediterranean countries and their interactions over the centuries with Greek and European civilisation.

Since 2017, the orchestra has been an official member of the Hamsa Oriental House - International Center for Culture and Arts of the Eastern Mediterranean, which is mainly active in studying oriental dances. In collaboration they organise music and dance performances and seminars.