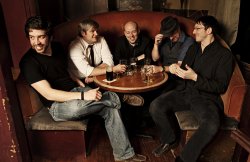 Canada
Tracks
Videos
About
Spancil Hill
by The Rolling Kings
Influence: West European
Genre: irish, celtic
share
repost
comment
buy
add to favorites
About "Spancil Hill"
This song is an old Irish ballad about an ex pat Irishman who has a dream he is back at the municipality knows as the Cross of Spancil Hill during the annual fair, where horses were auctioned and sold around a big festival of games, food, and drink. He remembers his lover at the time and wakes up in California at song's end.


See all tracks (2)
Follow
Send Message
About
The Rolling Kings, a five-piece Celtic Rock ensemble, took its name from the lyrics of the old shanty, “South Australia”. Hailing from St. John’s, the band draws influence from the roots music of Newfoundland and Ireland, but also from rock, folk, and countless other genres when writing and arranging their songs.