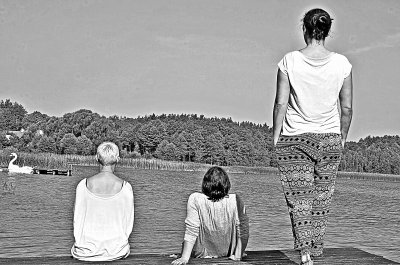 TRZY DNI PÓŹNIEJ "POKÓJ JEJ CIENIOM" LP PREVIEW
by TRZY DNI PÓŹNIEJ
Share
Influence: East European , Scandinavian
Genre: folk, vocal, experimental, electronics, instrumental
About "TRZY DNI PÓŹNIEJ "POKÓJ JEJ CIENIOM" LP PREVIEW"
This preview of our third album "Peace to her shadows". Thi album is a collection of musical impressions we collected and composed ourselves, which we ded- cate to our Grandmothers. Their difficult lives taught us to peacefully look for and hope for the light, preferably humming along the way. All lyrics and melodies on this record portray the multicultural
dentity of Lower Silesia we come from. We are interested in this melting pot of historical events as seen by women over several centuries. Aside from the musical memories held by our beloved ones, we include here pieces based on the work of Anne Louise Karsch (a poet born in the 18th century n Świebodzin and considered a Prussian Sappho) and on the memories of Ester Golan, a woman of Jewish descent born in Głogów at the beginning of the 20th century. The reality which we have described on this album – seen also through their eyes – is an attempt to save the timeless world n which a person is defined not by their nationality, ethnic origin or social status but by the actions
hey take to preserve humanity in themselves and in others.