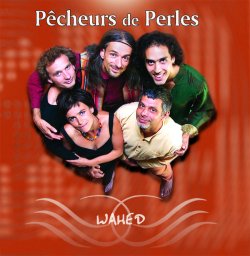 -
Tracks
About
Abaida
by Pecheurs De Perles
Influence: Mediterranean
Genre: oriental arabic
share
repost
comment
buy
add to favorites
About "Abaida"
A descendant of the East African slaves sold in Bassora by Arab and Persian merchants, my nanny Abaida was a marvellous mother. Towards the end of her life, she often repeated : « my death certificate is on its way; it is somewhere between heaven and earth, thus goes life. »
Lyrics : M.Alnuma
Music : M.Alnuma - O.Milchberg- M.Autexier

See all tracks (3)
Follow
Send Message
About
Concert musicians Pêcheurs de Perles (Pearl divers) is based in the south of France. They are composed of an Iraki singer and four European musicians. The band's origins come from a very rich musical tradition (Persian Gulf Pearl-divers) and allow both Eastern and Western countries to meet and come together. This combination has given a style of music which is sensitive, impassionate, fl... more
Influence
Mediterranean
Genre
oriental arabic
Other Pages