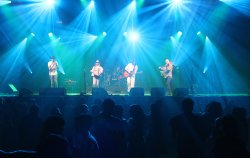 
See all tracks (21)
Follow
Send Message
About
Contrast and interplay between silence and sound, smooth and wave, calm and wind, wood and silver, orange and black… The band "Minnus Trelligh" have gathered to accomplish this equation in an attempt to create harmony in music which they love themselves – the performers are not limited in some well-defined genre, style or phonation. "Minnus Trelligh" is a music of beauty, called to... more
Influence
Scandinavian
West European
Genre
ethnotronic, celtic, dance, electronic
Other Pages