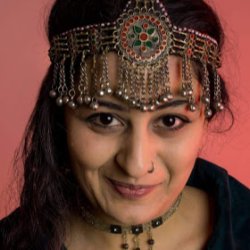 Spain
Tracks
Videos
About
Sajjan Yaar
by Maham Suhail
Influence: India , Gypsy
Genre: modern folk fusion, sufi
share
repost
comment
add to favorites
About "Sajjan Yaar"
'Sajjan Yaar' is a Sufi (mystical) piece of poetry in Siraiki language (from Pakistan), weaved into a folk composition particular to the system of music/scales from Sindh, especially southern Sindh, Cholistan, northern Punjab.
The song features Wahid Bakhsh Faqeer (a veteran folk artist) on male vocals, and the lyricist is a late Sufi saint. The melody has been co-written by myself and Wahid.

The main idea in the poetry is a longing to unite (a very Sufic concept of unison with the Beloved (Allah)) with Allah, and expresses a few states of being along the way, also some devotional verses about the qualities of the Beloved, that being the Divine (Allah), while being in praise of 'Panj-tan Pak' (the sacred pentagon of Prophet Mohammad & his family) in the last verse, as per the focal belief of some Sufic orders.

Follow
Send Message
About
Maham Suhail's primary genre is World Music (Modern Folk Fusion), and her secondary genre is Ambient Sonic Art. She has been a recording and performing artist since 2016, and has curated and produced live performance and studio recorded projects, across a few styles, cultures and regions, during travel and while moving around her own country (Pakistan) as well.