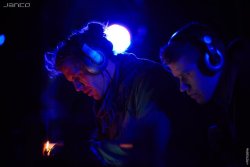 
See all tracks (7)
Follow
Send Message
About
The duo Lauge & Baba Gnohm consists of Henrik Laugesen and Kalle Christensen, both born in 1985 in Denmark. They first met in 2008 in Christiania. After a successful day in the studio, they decided to put their previous solo projects on hold, and team up. Lauge & Baba Gnohm was formed in the late winter of 2008, and that wintery feeling which was present in their first tracks, still lea... more
Influence
Scandinavian
Genre
ambient, psychill, chillout
Other Pages