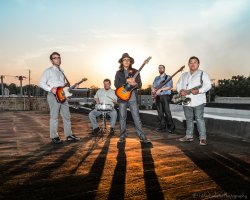 United States
Tracks
Videos
Photos
About
Día De Muertos
by Lalo Cura
Influence: Latin American
Genre: rock folclorico
share
repost
comment
add to favorites
About "Día De Muertos"
This is a song about Day of the Dead, a Mexican tradition that has endured the test of time. A celebration that can be traced back to our Pre-hispanic ancestors, the Day of the Dead has evolved throughout the eras, but it maintains a special meaning for many people, and we hope to keep it alive for generations to come.

This is the first song released from our upcoming album! Stay tuned for more!

See all tracks (7)
Follow
Send Message
About
Lalo Cura is a Spanish rock band based in Goshen, IN. Formed during the infamous Mild Winter in the early weeks of 2012, Rafael Chavez and company decided to try out some musical ideas and sounds. Happy with what they had accomplish, they decided to move forward and record an album, La Mala Racha. With the help of some of the finest musicians in the area (Sonny Carreño, Titus Arko, Adam ... more
Influence
Latin American
Genre
rock en espanol, rock folclorico,
Other Pages