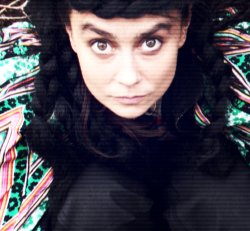 '9 Languages' draws from traditional musical scales. However, it is not a compilation of archive material, but a coherent whole, speaking modern musical language, based on the original Cicha’s style, her charisma, individual expression, and musical experience she gained in The Centre For Theatre Practices “GARDZIENICE”. Cicha invited multiinstrumentalist Bart Palyga to arrange this material. Duet Cicha/Palyga uses more than 13 as well ethnic and electronic instruments and sings as well in archaic aliquote style as well as traditional and rock.

9) Mix of melodies from the Kurpie region
Length: 4mn 29s

See all tracks (17)
Follow
Send Message
About
Karolina Cicha is a singer-songwriter, actress, composer, multiinstrumentalist. One-woman-orchestra. She plays many instruments at once and sings using vocal techniques that she developed herself.

Alongside her music, she has also worked regularly in the theatre. Between 2007 and 2009, she played and sung the title roles in “Electra” and “Ifigenia in A…... more
Influence
East European
Jewish
Gypsy
Genre
ethnic, rithual, poetic, rock
Other Pages