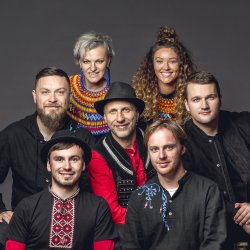 Tell me, God, when I‘ll change
Why can’t the magic of one woman
Conquer my heart once and forever
So that I‘ll anchor in a firm place like everyone

I can’t settle down,
Calm down or be tamed
I don’t want your advice
Let my life get into extremes

See all tracks (6)
Follow
Send Message
About
The Slovakia-based band Hrdza have been on the worldbeat scene for almost 20 years. From their beginnings they have played their own distinctive compositions rooted in the Slovak traditional music, fusing east European folk elements with modern music influences. Hrdza are a powerful live act; strong vocals and catchy tunes evoke a favourable response from any kind of audience. They have release... more
Influence
East European
Genre
worldbeat, folk, folk rock, ethnic music
Other Pages