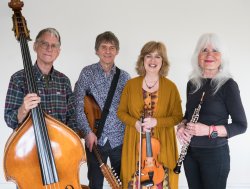 United Kingdom
Tracks
Videos
Photos
About
Sun — Live (excerpt)
by Flatworld
Influence: East European
Genre: east european
share
repost
comment
buy
add to favorites
About "Sun — Live (excerpt)"
Jerzy Bawoł, Kroke's accordionist, played this to Neil on the car stereo one evening as the band were packing up after performing at the Courtyard in Hereford. "Collected in a car park", as Neil likes to announce at Flatworld gigs. We had to make a small change so it could be played on mandolin and violin (composer Tomasz Kukurba plays viola in Kroke).

Rich compelling melodies and tight driving rhythm, Flatworld play an eclectic mix of music from Eastern Europe and beyond.

We take tunes from eastern European folk traditions (and a few from elsewhere) and present them in a lively and accessible form — audiences are usually dancing by the end of our show. <... more