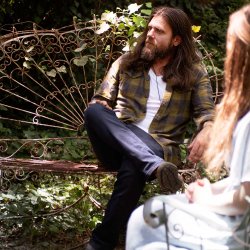 United States
Tracks
Videos
Photos
About
Complicated Man
by Ezra Vancil
Influence: North American , Latin American
Genre: folk, folk rock, indie folk, acoustic, singer songwriter, americana
share
repost
comment
buy
add to favorites
About "Complicated Man "
Featuring bass & vocals of Lori Martin and Vocals of local Jazz singer, Kimberley Nicole and Percussion, Chris Brush. Complicated Man, from Ezra Vancil's new album, You, tells the tale of his own love story's beginning. The album itself is a very personal history of love, and Complicated Man is the beginnings of the story of he, and his now wife; who were at one time just in a circle of friends. With an accompanying video shot in the locations of their youth.


See all tracks (5)
Follow
Send Message
About
an American singer/songwriter based in Dallas, Texas. While in the past he has written and recorded in the rock, pop, andexperimental genres, a more mature Vancil has now found a sense of permanent belonging and connection within the community of Americana artists.Ezra also has a love and fascination with the rhythms and percussion of India as well as some Latin territories; his long term appre... more
Influence
North American
Latin American
India
Genre
americana
Other Pages