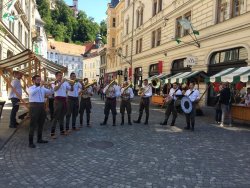 
See all tracks (2)
Follow
Send Message
About
Brass band ‘’Dragacevske trube’’ was formed in March of 2013, as the successor of Jovica Pavlovic’s brass band which existed from 1996 to 2007 and won several awards like The best ethno playing in Lobez, Poland 2006 or The special award for the preservation of folk tradition in Kucevo 2007. The band has 9 members and it was helped and supported during its formation... more
Influence
Balkan
East European
Genre
ethno, traditional, balkan music, jazz, world music
Other Pages