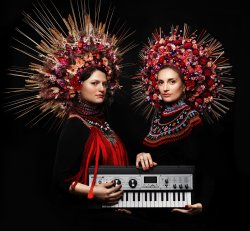 Poland
Tracks
Videos
Photos
About
Jestem Sobzie Starozina
by DAGADANA
Influence: East European
Genre: world, jazz, folk, electronic
share
repost
comment
buy
add to favorites
About "Jestem Sobzie Starozina"
A polish song from the repertoire of Waleria Żarnochowa, a great singer from the Kurpie Region (the village of Dąbrowa) who died in 1988. This piece is a tongue-in-cheek story of poverty: here a poor old man who has no possessions save the old coat on his back, and a long whip, plans to buy a coach to carry his wife and − probably numerous − children. But all he can afford is an old coach, full of holes through which the rain pours in. But even though it’s uncomfortable and a tight squeeze, and there’s only gruel to eat, the most important thing is that the whole family are together. Because what counts most in poverty is to care for your nearest and dearest, and so the song seems in praise of the simple life.
The song is performed in the Kurpie dialect, which makes it sound more cheerful. To decode the words’ meaning into Polish one must learn the basic rules of the dialect: the Polish syllables pronounced as “bee”, “vee” and “pee” turn into “bzee” (eg., sobie becomes sobzie), “zee” (eg., starowina - starozina) and “psee” (eg., kupię - kupsię). You can also clearly hear the distinctive “mazurzenie” accent, prevalent in the Kurpie Region (as well as in most dialects of the Mazowsze Region). This is characterised by the sounds “sh”, “tch”, “zh” and “dzh” turning into “s”, “ts” “z” and “dz”.

I am an old man

I am an old man and I don’t have a groat
Just an old whip and an old coat.
But I’ll buy a coach for carrying my wife and kids.

I’ll buy a coach that’s made of holes
I don’t have enough for fol-de-rols.
When it’s raining they’ll get wet, my wife and kids.

I’ll cook them some gruel that’s nice and thick
So they won’t get hungry, or not too quick.
When I’ll put it on the table, we’ll eat all of it.

And I’m thinking hard inside my head
How will I spend the night ahead?
I shall cuddle in my coach, with my dear wife and kids.