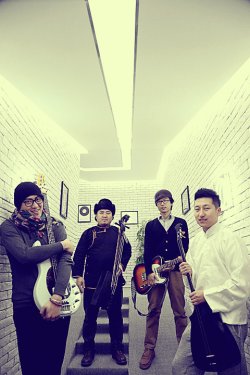 China
Tracks
Videos
Photos
About
Ajinai
by Ajinai
Influence: Asian
Genre: folk, rock
share
repost
comment
add to favorites
About "Ajinai"
According to legend an ancient Indian king gave the name Ajinai to his magical green horse. In the Mongolian language, the word is now used to describe a prized steed, a mount worthy of a king, a horse with speed, endurance, and an untamed spirit. Ajinai is also the title bestowed on the fastest horse at the annual Naadam festival.

Ajinai of my heart,

you are the pride of the grasslands,

Mongolian language that I love,

rooted in the core of Asia,

carry our songs as you gallop across

every inch of land touched by the sun.

See all tracks (11)
Follow
Send Message
About
Ajinai, formed in Beijing in 2009 and comprised of members culled from across China, is dedicated to bringing traditional Mongolian music into the 21st Century.

The band’s roots are planted firmly in the Mongolian grasslands, but their youth and experience lends a unique and contemporary twist to the traditional music. The group’s music is fueled by themorin khuur, ... more
Influence
Asian
Genre
folk, rock, ska, experimantal, electronic
Other Pages