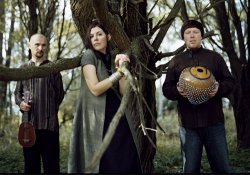 Russia
Tracks
Videos
Photos
About
ABOUT
THEODOR BASTARD is international world-music collectives.The band works between genres that can be defined as world music, folk, experimental and trip-hop. The trademark of the band is the unique voice ofYana Vevaand unimprovable sound-producing byFedor Svolotch.

THEODOR BASTARD is one of the most successful contemporary Russian music collectives. The band works between genres that can be defined as world music, darkwave and trip-hop. The trademark of the band is the unique voice of Yana Veva and unimprovable sound-producing by Fedor Svolotch.

Yana Veva has a rare vocal timbre and she uses a special vocal technique that refers to Arabic and Indian vocal tradition. Besides singing in THEODOR BASTARD Yana recorded an album with Stefan Hertrich (Shiva in Exile, Darkseed, Betray my secrets) “Nour” in which all vocals were sung by Yana.

To support the album THEODOR BASTARD went on tour around Russia, Belgium, Germany and visited several festivals in Europe and Russia. Live performance is the strongest aspect of THEODOR BASTARD (totally there’ve been more than 300 concerts in band’s history). There are six musicians in the band who use plenty of electronic devices and special acoustic instruments like various ethnic percussions, kazu, saz and others.

Apart of recording their albums, THEODOR BASTARDAare always keeping in touch with musicians from other countries: collaboration with Martin Attkins from Pigface who released a track by THEODOR BASTARD at his label Invisible/Underground Inc.; with Peter Christopherson of Coil – the band recorded a version of “Love's Secret Domain”; with Ethan Jordan, American saxophonist, playing live together in Brussel; and also THEODOR BASTARD was the support band for the Nine Inch Nails gig in St.Petersburg, August 2007.

In June 2011 the band successfully performed at the largest German festivalWGT in Leipzig. The concert took place on one of the main stages of the festival, in Central Theater of Leipzig. Also, during the tour, the band gave solo concerts in Poland and Lithuania.

Recently, in November 2011 the release of"Remixed"on CD - the collection of remixes of THEODOR BASTARDA’s songs - has taken place. Such artists from all over Europe asNeotropic, Animals on Wheels, Up,Bustle&Out (all three of them has signed on the label Ninja Tune), Scanner, State of Bengal, Geomatic, Flint Glass, and others took part in the work on the collection.

During all the fall and winter of 2011 THEODOR BASTARD are occupied with the recording of the new album which, as the musicians themselves admit, has become the most complicated and tedious in their career. The musicians had recorded the material in several studios at the same time. Many invited guests took part in the recording. On the album one can hear such instruments as udo, mbira, marimba, reco-reco, caxixi, ashiko, and spring drum. Fedor also used the instruments that he had invented and contrived with his own hand of improvised material such as coconuts, door springs, empty bottles, and plastic. The album will be the most lively and diverse in its contents in the entire history of the band. Also famous British band Fun-Da-Mental (in the collaboration with the Africans The Mighty Zulu Nation) and unique French singer Julien Jacob took part in the recording of the compositions for the album.

Follow
Send Message
About
THEODOR BASTARD is international world-music collectives.The band works between genres that can be defined as world music, folk, experimental and trip-hop. The trademark of the band is the unique voice ofYana Vevaand unimprovable sound-producing byFedor Svolotch.