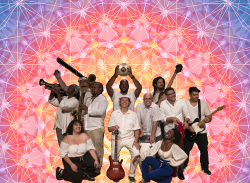 United States
Tracks
Videos
About
Walk Lightly Pon The Land (featuring Ilana And Force)
by TapRoots
Influence: Caribbean , Latin American
Genre: reggae, salsa, ska, soul,
share
repost
comments: 2
buy
add to favorites
About "Walk Lightly Pon The Land (featuring Ilana And Force)"
Sometimes a song just comes to you in a moment, like a gift from that place and time. This song came from one of my favorite places in the world, one that I refer to just as “the listening place.” It is at the top of one of the hills in the Mount Holyoke mountain range in Amherst that looks out over this vast expanse of forest; as far as the eye can see there are just these rolling hills trailing off into the horizon. Red Tailed hawks play on the wind, gliding and diving in an endless dance, and the air is filled with the music of nature at work. In the stillness of that place the chorus poured into and just grabbed hold of me, and on the hike down, as I pondered our necessary connection to the land and wondered why we trash and brutalize Mother Earth the way we as a society do, the rest of the words came bubbling up like a mountain spring. This song was originally written back when I was playing regularly with The Alchemystics - back when Demse and Ras Jahn were still with us, and the world didn’t seem so cruel - and so many of the rhythmic and melodic elements came from that time, when my musical vocabulary was being expanded by playing with Demse and Garret. It seemed only fitting to have The Alchemystics’ own Ilana and Force (as well as John Corda, their current keys player) join in on this one. Force’s verse here is so loaded with his signature multi-layered wordplay, and still blows me away after hundreds of listens.


See all tracks (4)
Follow
Send Message
About
Born out of the desire to explore and blend a wide variety of often paradoxical musical influences, TapRoots is a new vision of cultural fusion from multi-instrumentalist and producer Matthew King. While the music is at once familiar - borrowing from elements of rock, reggae, salsa, soul, hip hop, samba, folkloric rhythms, and beyond - it taps into the roots of these traditions while imagining ... more
Influence
Caribbean
North American
Latin American
Genre
samba, cuban folkloric, reggae, soul, rock, orisha, funk
Other Pages