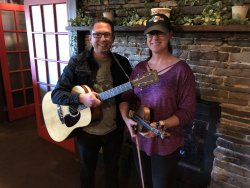 
See all tracks (6)
Follow
Send Message
About
Seldom Sober was formed in Savannah in 2007 by Michael Corbett and Colleen Settle, who first began playing together in 2006. Colleen and Michael were also part of the Savannah Ceili Bandfrom 2007-2019 and have performed at festivals, theaters, pubs, parties, weddings, and other events throughout the lowcountry. Seldom Sober has twice performed as the opening band for Derek Warfield and The Youn... more
Influence
West European
Genre
irish
Other Pages