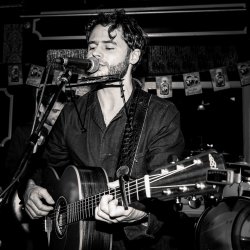 See all tracks (2)
Follow
Send Message
About
Robb Murphyhas the unique ability to transport his listener into his musical world with a combination of stunning acoustics, sublime vocals and heartfelt lyrics. The rhythmic undercurrent of Robb Murphy’s music entices his audience to join him on a journey of traditional Irish storytelling with elements of pop, country, classical and folk.