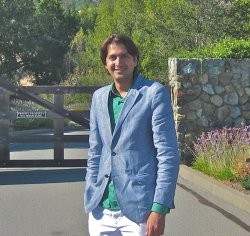 India
Tracks
Videos
About
ABOUT
Sit down and chat with artist, composer, producer Ricky Kej, and within minutes you will conclude that he is one of those people who were simply born to make music. Throughout his international upbringing, from his birthplace in the U.S. to his boyhood and schooling in India, he felt a strong need to create and record music. So certain and steady was the drive that he was able to endure college to for dentistry, thereby satisfying his parents’ wishes before pursuing his own dream, which never waned. He graduated as a Doctor of Dentistry and promptly launched into his music career, never practicing a single day as a dentist.

To satisfy his love of music along the way, Ricky learned to play guitar and keyboards, performing with various Rock bands. He continued producing jingles, which he’d begun in college, and in a span of 13 years he has had over 3000 placements for varied clients such as Toyota, Essilor, Levis, Lee, Kingfisher, Air India, Fosters, Ford, IBM, Nike, Arrow, Elle Fashion, Biocon, Infosys, and more. A fond highlight of his television career was composing music for the opening ceremony of the ICC Cricket World Cup, held at Dhakka on February 17th 2011. This Opening ceremony was telecast in over 200 countries worldwide. It was hailed by The World Media as the best Opening Ceremony in the history of World Cup Cricket.

Naturally, Ricky was well-positioned to compose and record longer works and he moved on to composing the entire score and songs for five feature films in the Kannada language including Accident (2008) and Venkata in Sankata (2010).

Ricky simultaneously developed his career as an international recording artist, and in 2003, he released his first International lounge album Communicative Art - Lounge from the Bay to rave reviews; songs from this album have found its way into over 20 international compilations in France, Poland, China, Taiwan, India, Israel, etc. In 2008, his second and third albums Kamasutra Lounge (Parts 1 & 2) were released by Water Music Records – USA, distributed by Universal Music. To date, Ricky has also released 7 albums with Virgin EMI. In the Dance genre, Ricky released the internationally successful Dance/Percussion based album Fiery Drums, followed by Fiery Drums Volume 2, Mesmerizing Flute and Mesmerizing Santoor. His music video for “Arabian Sea” (Fiery Drums, 2012) had tremendous airplay on VH1, leading him to be declared an “India Rules- Artist” by VH1 in September 2012. Separately, he has also composed/produced tracks for various French compilation albums, such as Indian Zen and Des Voix De L'Inde, and,he created an official remix of the Oscar-winning Slumdog Millionaire song “Jai Ho” which was featured on the compilation album Dance The Golden Years for the U.S. market.

In 2013, Ricky released his first independent albums in the U.S. via his own Raveolution Studios, including Shanti Orchestra, Ballad of Maya and Kamasutra Lounge – The Deluxe Edition.

Currently, Kej travels between the U.S. and India, where he has appeared as a guest judge on many singing reality shows, and is an activist for Music Education and Animal Rights. In 2011, Times of India nominated Ricky as one of Bangalore's Most Desirable, and Indian Express hailed him as the most eligible bachelor in Bangalore. Ricky is the Festival Curator for the International Film Festival at UB City – “Film Harvest” – and with a keen interest in art, he curates works of younger artists to help them showcase their works at art galleries and exhibitions. For this effort, he was awarded the National Youth Icon Award by the Rotary Club of India.

Follow
Send Message
About
Sit down and chat with artist, composer, producer Ricky Kej, and within minutes you will conclude that he is one of those people who were simply born to make music. Throughout his international upbringing, from his birthplace in the U.S. to his boyhood and schooling in India, he felt a strong need to create and record music. So certain and steady was the drive that he was able to endure college... more
Influence
Asian
India
African
Genre
world music, new age, dance, chillout
Other Pages