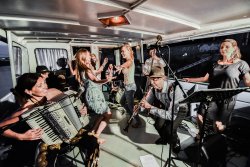 
See all tracks (10)
Follow
Send Message
About
The Pressburger Klezmer Band is a unique musical body which has attracted quite a number of fans since it was established in 1995. It is the first Slovak band to take its inspiration from the emotive dance music of Central and Eastern Europe known as klezmer. At the same time, it is also the highest rated among similar bands within the region of the former Czechoslovakia. The band serves up an ... more
Influence
Jewish
East European
Balkan
Genre
klezmer
Other Pages