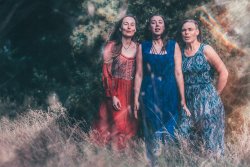 Denmark
Tracks
Videos
Photos
About
Te Orbina
by Nevesta's Voice
Influence: Scandinavian , West European
Genre: vocal, polyphony, folk song, traditional music, joik,
share
repost
comment
buy
add to favorites
About "Te Orbina"
This melody is rooted in the ancient and non-verbal tradition of joiking. It’s found in the culture of the sami people which inhabits the northern part of both Norway, Sweden, Finland and Russia. Traditionally the joik is a musical manifestation of for example a person, a natural phenomenon or a feeling. We have been told that this joik melody originally was dedicated to an orphan.

See all tracks (3)
Follow
Send Message
About
Danish-German vocal trio Nevesta’s Voice gathers, interprets and performs folk songs from the European continent and its borders. Travelling through song traditions from The Middle East and Eastern Europe, through the Baltics to the cold North, the group is driven by a great curiosity for our cultural roots and the people of the past.