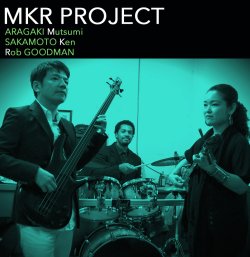 The Okinawan world funk jazz trio. They formed the band in July, 2015 in Okinawa, Japan. They progressively integrate Okinawan traditional music with the contemporary sound such as Jazz, Funk, Soul, Hip Hop, Afrobeat, Ambient and so on, and they pioneer the new chapter of Okinawan music. Their inspiring lyrics and their soulful and sophisticated groovy unique sound of world standard have been highly regarded by musicians and music critics internationally. Aragaki's 2 songs were selected for WOMEX2015 Okinawan music sample CD. They debuted as an opening act at a live show of Kate Havnevick and Guy Sigsworth, producer of Madonna Seal, and Bjork. They performed at Trans Asia Music Meeting 2016 showcase. On the world chart of the world music site Ethnocloud in Feb. 2016, their video appeared at 9th and 12th, and also 1st and 2nd on Asian influence chart. It was also selected for streaming at South by Southwest (SXSW). On Songlines Magazine May 2016, a leading world music magazine published in the UK., they were introduced.

The main focus of the trio is Aragaki who has a strong voice and is an adaptable and imaginative sanshin player.Sakamoto and Goodman are also accomplished musicians and their different musical interests and backgrounds are all given space within this framework.

it will be fascinating to see where it goes. MKR Project are establishing themselves on the Okinawan music scene and there isn’t anyone else doing quite what they do.