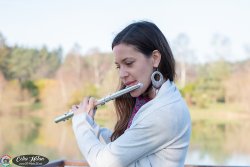 France
Tracks
Videos
Photos
Blog
About
ABOUT
Flute player Lucie Périer is renowned for her use of silver boehm flute on traditional repertoire both on Irish music, and breton and french folk music for dancing. She has toured extensively in France with Normandy-based folk band Les Round'Baleurs, as well as fest-noz band and award-winner Trio Tarare.

Born to a very musical family steeped in Irish traditional music, Lucie defines Irish music as her «native» musical language, as she was taught her first tunes by her father, fiddle and box player Christian Périer, and her first songs by her mother Jacqueline Fontanel.

Having spent most of her musical life living in Rennes, a thriving place for irish and breton music, Lucie crossed the borders in 2017 and flew 10000 miles away from her homeland to New Caledonia for a one-year in-depth journey into the maze of world music in the Pacific area.There, not one month after she set foot on the island, she was already playing on TV with one of Caledonia's most beautiful voice, Rosi Garrido, then played dozens of gigs with her husband, banjo and box player Nicolas Delatouche, and formed "Keveiled Trio"with cello player Jérôme Marchand and guitar player Yvonick Fortin.

She is nowregarded as a skilled, sensitive and versatile musician and is also a demanded teacher in New Caledonia, where she hasfounded her own traditional music school,L'École Anémochore.

«flute player Lucie Périer is exceptionnally good and reminds us of Brian Finnegan, one of the best flute players in Ireland» Ian Freedman, The Readifolk Radio Show, juillet 2014.