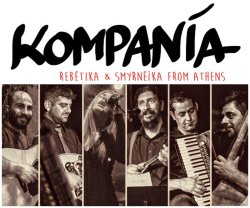 Greece
Videos
About
ABOUT
2011:“KOMPANÍA”was officially formed at the end of 2011, although its members were already playing together for many years, at any given opportunity! The first band members were: Katerína Tsirídou, Sotiris Papatragiannis, Dimítris Kranídas, Níkos Protópapas and Giánnis Kalafatélis. A determining part in the launch and evolution of the band, has also been played by Margot Schenk (manager/production) and Loek Schrievers (sound engineer/producer), both of them former members of the Dutch rebetika band “Palio-Paréa”. They heard the group many times when they visited or played in Athens and decided their music should also be heard outside Greece, so they organized the first tours and they werw the producers of the first two cds. Violinist Hector Cosmas was an original member of the band, but unfortunately he passed away during March 2012, just two months before “KOMPANÍA’s” first tour in Holland and Belgium.

2012: That first tour had great impact and was highlighted by the release of a cd with live recordings of one of these concerts. The cd “KOMPANÍA– Live!” was presented at a new tour in Holland and Belgium, which was also very successful, got excellent reviews from the press and the cd was ranked #5 at the World Music Charts of Europe (wmce.de) for February 2013.

2013: “KOMPANÍA’s” next step abroad was another tour, during the spring of 2013 (April/May) in Europe, where this time a studio cd was recorded in Holland, under the title "Round Trip". That cd was also ranked #7 at WMCE (January 2014) and got great reviews from important music magazines like "fRoots" and more.

2014 - 2015: In the next two seasons (2014-2015) Dimitris Gkinis joined as the new accordion player of the band. "KOMPANÍA" played in the most important concert halls in Greece, like "Megaron, the Athens concert hall", "Badminton Theatre" and many more. They continued to travel in big festivals and theatres around Europe (Swizzerland, Austria, Germany, Holland, Belgium) presenting the "Round Trip" and even appeared at important tv and radio shows in these countries as well as in a German documentary film about Athens and rebetiko, made for the Berliner Philarmonic Orchestra, presenting "KOMPANÍA" along with the world-famous violin soloist Leonidas Kavakos.

2016 - 2018:Ioulía Karapatáki(lead singer, guitar) andThodorís Petrópoulos(bouzouki, oud, guitar, vocals) two of the most promissing artists of the new generation in Greece, joined "KOMPANÍA" on February 2016, replacing Katerina Tsiridou & Dimitris Kranidas. A new (3rd) album wasrecorded and produced in Gothenburg, Sweden, by the bilingual title (Κρίση / Crisis) and it also entered the WMCE's list with the best albums of the year!

New tours came up and the band visited newcounties for the first time, like Sweden, France, Albania, Israel,Cyprus and Luxemburg, expanding their musical horizons and of course the audience for rebetiko!

Follow
Send Message
About
2011:“KOMPANÍA”was officially formed at the end of 2011, although its members were already playing together for many years, at any given opportunity! The first band members were: Katerína Tsirídou, Sotiris Papatragiannis, Dimítris Kranídas, Níkos Protópapas and Giánnis Kalafatélis. A determining part in the launch and ev... more
Influence
Mediterranean
East European
Balkan
Genre
rebetika, smyrneika
Other Pages