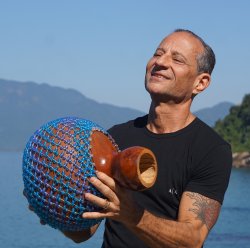 Once again, I learned from this song that an artist, at times, must be flexible while conducing the process of their creation to its completion. While Wayne Shorter affirms that “No song of mine is ever finished…they’re ALL works in progress!” (…and, maybe he’s right?!), I strive hard to keep my grooves real tight, both in the studio as well as when performing “live”!

But, I digress… I originally wrote this as a piece for a harp soloist. At the time, I had been performing around the world, off-and-on, with various ensembles that, curiously, included a virtuoso harp musician. And, I guess that form this proximity to the instrument, my original tracks had a symphony harp as the lead voice. And, so it remained, for months, as I developed its body. But, as I went along, the song kept getting more “boudoir-like”, more reminiscent of a Latino film noir seduction dance scene than the celestial/“church-like” tones of the harp.

So, before I actually recorded a real harp… I scratched the “harp idea” and decided to bring in a fresh Carioca trumpet player - José Arimateia - instead. I had called him to the session so that he’d record a couple of other songs, but his tone and his vibe that day uplifted the entire session, so I had him take a pass at “Let’s Just Go…”,,,,, and he took it to where I wanted it to go. On the FIRST TAKE!! (Wow!! I get goose-bumps again, as I write this!)

And, dig this: as if the day and the session weren’t already proceeding in a magical manner…singer/vocalist, Luana Mallet, stopped by the studio and was hanging out just enjoying the vibe. When she heard what we were doing with this track, she really got into it! And, while she was softly vocalizing the trumpet parts (with harmony) in the studio control room as José was recording, Daniel and I turned our heads towards each other, as we knew that her voice would also complement “Let’s Just Go…”!

The week before, during another mixing session with Junior Lobbo, Daniel and I had simultaneously felt like the song would shine with a female voice. After all, there’s a clear “invitation to intimacy” in the title, the lyrics, and the mood. Isn’t there…?!


For more info on Frank Colón's Percussion Projects, come on over to
http://www.frankcolonpercussion.com
and say, "Hello"!
Thanks so much for your luv and support!

See all tracks (2)
Follow
Send Message
About
Frank Colón’s music will move your body and soothe your soul. His sophisticated, hot and soulful music raises consciousness, brings people together, and promotes peace!