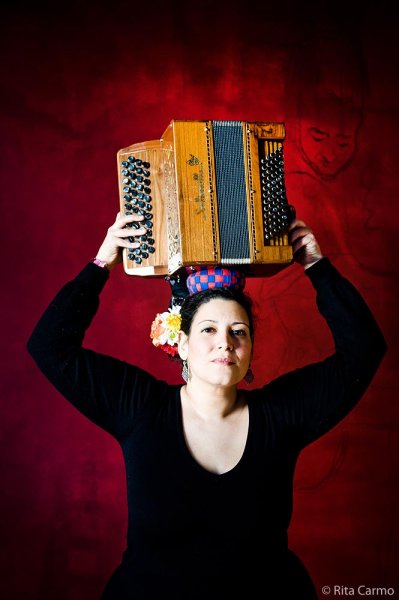 The look of Andrew Cronshaw over the cd "Em Casa"

June 06/17/13, 2013
Not realising this was a double album I put the second CD on first, and it's as impressive opening - deep hand-drumming and bell-chimes leading into a forming the sole accompaniment to Celina da Piedade's calm, (on this track) fado-like, vocal. This isn't in any way a fado album though; she's noted button-accordionist from southern Portugal, deeply involved in the folk songs and dance music of Alentejo, and her material ranges widely, vocally and instrumentally, through her own and traditional material.
Track two brings in her accordion in a light-touched waltz instrumental accompanied by piano and brushed drumkit. Another texture change into chuffy flutes, pandeireta and bombo in a pair of corridinhos with tongue-twisty group vocals as a trio with Gaiteiros de Lisboa'a Carlos Guerreiro and José Manuel David. Another elegant fado-style vocal accompanied by harp and rich dark cello, them over piano, limpid accordeon and unexpected, nicely-judged musical saw it's winning traditional slow-mazurka song A Lira, with intro by Kelly Thoma's Cretan Lyra. A couple of more accordeon-led instrumentals, a liltingly attractive song joined by soprano sax , and a rolling accordeon, drum and steam-organist instrumental to close.
There you go...this one works fine on its own and would have stood well as a single CD. But oh, tucked in the other flap, instead of the expected booklet, is the another CD, in fact CD1. With this being her first solo album after so much work as a founder-member of the band Uxu Kalhus asd with Rodrigo Leão and others, Celina had presumably built up more than a CD's-worth of stuff to record and get out there, and a large cast of people she wanted to play with. But CD1, again a mix of songs and her own tunes, is patchier than its companion, and the insensitive shythm section thumping in after a couple of verses of the opener isn't a promising start. It hat its moments though, particularly the string-quartet accompanied Toada, which combines a 19th Century song from Setúbal with instrumental sections using the 16th Century English melody Bony Sweet Robin. in fRoots mag