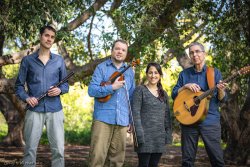 See all tracks (2)
Follow
Send Message
About
Black Velvet is Israel's premier Irish/Celtic band. The band was founded by Ehud Nathan in 1980, with the intention of performing Irish music as authentically as possible, while keeping up with the evolving end of the tradition.

Band members' original compositions have been added to the repertoire over the years, along with music from other traditions: the Celtic music of Britt... more
Influence
West European
East European
Middle Eastern
Genre
irish-celtic-balkan
Other Pages