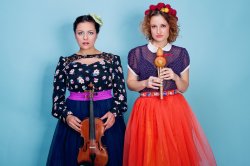 Follow
Send Message
About
Babooshki formed as a band organically in 2009. The thing that brought these young and talented musicians together is a passion to find common ground between the neighbouring countries of Poland and the Ukraine on a cultural as well as musical level. Their common history and traditions are stored in original, and full of charm, melodies. These melodies include Christmas carols and pastorals... more
Influence
East European
West European
Genre
slavic, jazz, ethno
Other Pages