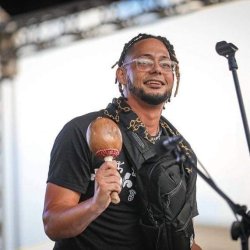 Puerto Rico
Tracks
Videos
Photos
Blog
About
ABOUT
Grupo ATABAL (or just ATABAL) plays Afro Puerto Rican music emphasizing contemporary plena and bomba. 37 years performing throughout Puerto Rico and internationally. Under the influence of Caymmi Rodriguez, singer, percussionist and Hector Atabal Rodriguez's son, the group has taken on a rich percussion sound - traditional bomba but with a modern pop sound. Many of the group's newest songs are the product of Caymmi's love of bomba and plena with the music knowlege and experience of Hector.

CAYMMI RODRIGUEZ is the group's songwriter, percussionist and singer for Atabal. He started out as the groups’ band boy, learned the ropes. He began playing panderos de plena, bomba drums and singing backup chorus with many other groups before becoming a member of Atabal. He also has the added task of being the band's administrator.

Atabal hopes to perorm at next year's New Orleans Jazz & Heritage Festival 2021 (this year's festival was canceled as a result of Covid19 pandemic) adding to the list of festivals performed throughout the United States and internationally in Caribbean and Folk Festivals such as Tazzfest in Oostende and Dranouter Festival (Belgium); the Festival del Libro de Guadalajara (Mexico) and Santo Domingo (Dominican Republic), Cuba Disco in Habana (Cuba) and other festivals in the Netherlands, Trinidad and Tobago, Haiti, Nicaragua and Venezuela.

In 2014 Atabal joined forces with David Marrero and produced the single Me diras que sí which has now been remixed with Amor contributing her sultry voice alng with Caymmi's strong vocal presence.

Yo soy Atabal is the group's 3rd video and reflects the transitioning of the band musically and internally. It presents Hector's roots from birth to now being called by the band's name. But it also gives followers an introduction to the souind they are searching for. Many bandmembers have been playing in Atabal during the past 4- 5 years; many are in their early twenties ( except for Raul Rosario who has been singing and playing with Atabal for more than 20 years).